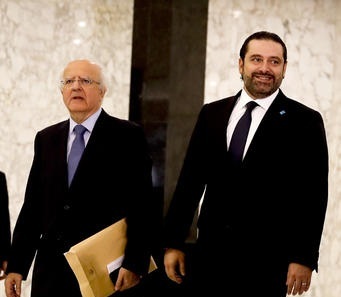 Prime Minister-designate Saad Hariri held consultations with the country's former premiers on Thursday evening in line with a long-standing Lebanese norm of visiting ex-PMs in the wake of the designation of any new premier.

Hariri held his tour only hours after he was formally tasked with forming a new government after he received a sweeping majority of 116 votes in the binding parliamentary consultations.

“Several challenges are awaiting us but I have confidence in President (Michel) Aoun and I'm optimistic regarding the new tenure and God willing the government will be quickly formed,” said Hariri after meeting Miqati.

Miqati for his part said Hariri's “mission is tough and it is not a walk in the park.”

“We talked about the need to turn the page on the past, especially the issue of those held in connection with Tripoli's clashes,” he added.

And after talks with Saniora, Hariri said that “everyone must take part in the government.”

"This government has clear missions regarding the elections and the state budget and we will cooperate with everyone," he added.

Saniora for his part described Hariri as “the right man for this stage,” noting that “he has the will, resolve and determination to confront the challenges.”

“We will stand by him and by President Aoun,” Saniora added.

Speaking after talks with Salam, Hariri said: "No matter how much we talk about PM Salam, words can't do him justice."

"Loyalty and honesty are two rare traits and Salam persevered and endured for the sake of Lebanon during a dangerous and crucial period in Lebanon's history," he added.

Salam meanwhile said that "a new chapter has started and the country deserves a young and wise leadership such as PM-designate Hariri."

"I wish him all success," he added.