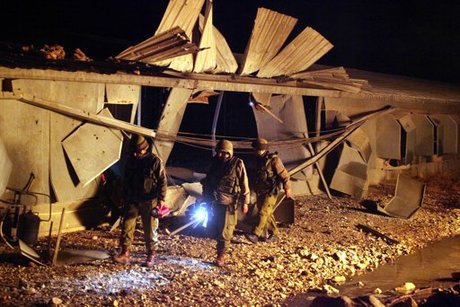 An al-Qaida-inspired group has denied claiming responsibility for a recent rocket attack from southern Lebanon against Israel, instead blaming a group linked to Hizbullah, a U.S. monitoring group said Monday.

In a statement issued on jihadist forums, the Brigades of Abdullah Azzam said the November 29 attack should be seen as a warning to the West and Israel from embattled Syrian President Bashar al-Assad, the SITE Intelligence Group said.

"The Brigades declared that the attack ... is to be construed as a message from Assad to Israel and the West, that if his regime is made to fall, then the field will open to the youth of the Sunni people to attack the Jewish state," the statement said.

The group gave examples of what it said was Syria's and Hizbullah's "cunning," claiming, for example, that Syrian intelligence was behind the March kidnapping of seven Estonian cyclists in Lebanon’s Bekaa region.

The seven were freed unharmed in July.

The Brigades in their statement said it was clear that Damascus and its Lebanese ally Hizbullah were keen for political reasons to blame the group for any security incidents in Lebanon, including a July attack on U.N. troops.

Their is no honor amongst criminal terrorist groups. I have never seen a time when some group did not want to claim responsibility for rockets.

This proves what was always suspected. Al Qaida Sunni crazies are Israel's best friends. Thank you Saudi Arabia for a job well done protecting Israel's interests and your own filth.

Gabby, I am happy you were able to convince you friends in Al Qaida to leave your other friends in Israel alone. This is an unbelievable achievement, buddy. Keep up the good work.