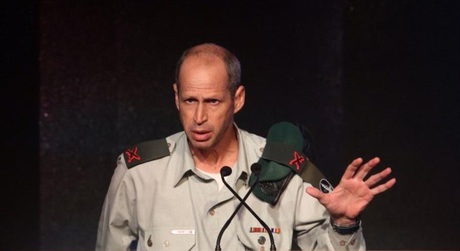 The head of the Israeli army's strategic division has said that Hizbullah's border show of force on Thursday was "more blunt" than usual, but that the group's "violations" of U.N. Security Council Resolution 1701 were “nothing new.”

Brigadier General Ram Yavne said Hizbullah's border tour for journalists was primarily a message of "mutual deterrence" with Israel and that while Israel takes the threat seriously, Thursday's show of force would not change the overall "calculus."

"I don't think this organization is in a very comfortable situation these days," he said.

"Its leadership absolutely understands the cost of an escalation," Yavne added.

Hizbullah spokesman Mohamed Afif told reporters that "this tour is to show the defensive measures that the enemy is taking."

The tour sought to paint Israel as afraid of a new conflict, while depicting Hizbullah as ready for war despite having committed thousands of its fighters to bolstering Syria's President Bashar al-Assad.

Journalists were taken from the southern Lebanese town of Naqoura, with Hizbullah fighters in full military regalia stationed along the route alongside the group's yellow flag -- despite an official ban on any armed paramilitary presence in southern Lebanon.

"We do not fear war, we don't hesitate to confront it. We yearn for it and we will confront it if it is imposed on us, and God willing we will win," a Hizbullah military commander dressed in digital camouflage and sunglasses told the reporters, recalling a famous statement for Hizbullah chief Sayyed Hassan Nasrallah.

Despite the bellicose tone, Afif insisted that Hizbullah believes "the chances of war are remote."

"Faces smeared with black and green camouflage, they stood silently holding guns and RPG launchers."
........and that according to Southern irani is an informative task:

Southern...... 17 hours ago
it's not a military task but informative about the zone and the status quo of the citizens who live around.

Why would they? It s aa media stunt.... cheap propaganda designed to weaken and take away what was of our army's credibility. And its mission accomplished. We should be panicking, not them! They're invincible mister law cuntu a3lam follower.

Обviously, how else would they comunícate With their partners?