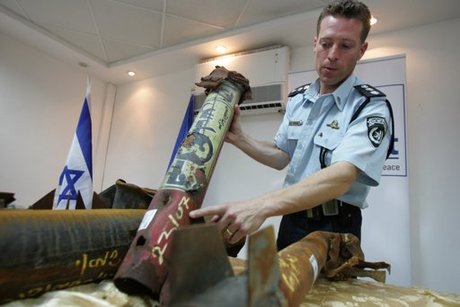 A police spokeswoman told Agence France Presse that none of the rockets caused casualties or damage. The Gaza militant group Popular Resistance Committees took responsibility for the Saturday firings.

The low-level unrest retained between Israel and Gaza since the end of October, when violence left 12 Palestinians and an Israeli civilian dead, came to an abrupt end on Thursday when Israel killed two Gaza militants.

According to the military, the militants -- one of whom had planned a deadly attack in Israel in 2007 -- were planning another attack on southern Israel by infiltrating from the Sinai Peninsula.

Palestinian fighters responded by firing five rockets at Israel, none of which caused casualties or damage. In an ensuing Israeli air raid at a militant training ground in Gaza on Friday morning, a father and his 12-year-old son were killed and 10 other civilians injured, after the attack caused a nearby house to collapse.

The Israeli army expressed regret that civilians were hurt but blamed Gaza's Hamas rulers for operating within residential areas.

Gaza militants fired twelve rockets at Israel on Friday, none causing casualties or damage. The Popular Resistance Committees assumed responsibility for five of them.

Israel frequently targets militants it says are about to fire rockets over the border, or attacks Gaza in response to such rocket fire. It also carries out targeted attacks against specific militants.

Its funny how the rockets always miss their target