20 Dead as Syrian Forces Clash with Defectors in Daraa, Idlib 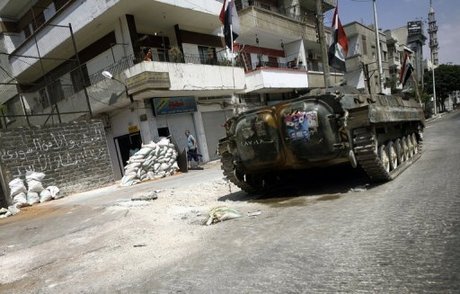 Syrian troops battled army defectors Sunday in clashes that left several military vehicles in flames. The fighting and other violence around the nation killed at least 20 people, the Local Coordination Committees said.

For the first time, an act of violent protest against President Bashar Assad's regime spilled across the border into Jordan, where about a dozen Syrians attacked their embassy Sunday in the capital, Amman, wounding at least two diplomats and four other consulate employees.

The 9-month-old uprising against Syria's authoritarian President Bashar Assad has grown increasingly violent in recent months as once-peaceful protesters take up arms and rebel soldiers joining the uprising fight back against the army. The U.N. says more than 4,000 people have been killed since March.

Opposition activists called for a general strike starting Sunday to add to the pressure on the government to stop its bloody crackdown.

Fighting between loyalist forces and defectors calling themselves the Free Syrian Army threatens to push the confrontation into civil war.

In one of Sunday's clashes, which took place before dawn in the northwestern town of Kfar Takharim, two of the military's armored vehicles were set ablaze, said the British-based Syrian Observatory for Human Rights.

Three other vehicles were burned in another clash near the southern village of Busra al-Harir, the group said. Similar battles took place in several other parts of the south, said the Observatory and the Local Coordination Committees, an activist group that organizes protests on the ground.

The Observatory said two people were killed in the clash with defectors in Kfar Takharim. Two other people who went missing days ago were tortured to death in the central province of Homs, and one person was shot at a checkpoint in the southern province of Daraa, the group said.

In Jordan, the Syrian Embassy said a group of protesters linked to the unrest at home entered the mission claiming they had paperwork to finish and beat up the consul, another diplomat, a security guard and several other staff members.

An Embassy statement said its guards arrested one of the attackers, identified as Syrian refugee Ahmed al-Shureiqi. It said Jordanian police arrested eight others, all Syrians allegedly involved in the Sunday morning attack.

Jordanian police spokesmen did not answer repeated calls to confirm the arrest.

The Syrian opposition called for a general strike on Sunday, the first working day of the week in Syria, saying it will go on until the regime pulls the army out of cities and releases detainees.

The LCC said security forces were breaking into shops closed for the strike in an attempt to force them to open. Residents in the capital, Damascus, said business continued as usual Sunday with shops, schools and other businesses operating normally.

The latest violence came a day after the French Foreign Ministry said in a statement that France was "deeply concerned" about the situation in Syria and warned Syrian authorities that they will be held responsible for any action against the population.

Rumour has it that the zero hour is approaching and that the detectors will outnumber those who will be left in the army.... And Bashar is still stubborn! What is he waiting for, the entire country beon fire?

marc, did you share your predictions with Gabby or Dr. Fashel? Considering that you know so much from being on the field and your informants are reliable and spread all over Syria, can you be more specific as to when? Gabby told us 5 months ago that ASSad and his regime will fall in three months, i.e. two months ago. But then he kept giving ASSad and his regime a grace period after a grace period after a great period. So please coordinate with Gabby, my friend, and keep predicting until you actually wake up. Let us know.

The first bomb shell that gets dropped on HOMS, you will be surprised when you'll see foreign airstrikes on Syrian military targets.

According to the Syrian government, it seems that the whole nation are terrorists!

What strike? Why who's working in Syria to strike? The workers are all in Lebanon where they were beaten, harassed, abused and killed by Hariri Mafia and his Christian Sunni cowards while pretending that they are for democracy, freedom, human rights (especially towards the Syrians in the absolute...nonsense) and the remaining Western propaganda bullshit.

Wait a minute, Bashar does not own the army? Any president who would order the killing of his people is a crazy person.

Good & fresh news, Asef Shawkat has been killed by his driver today

Bravo Free Syrian Army... the funniest things is those idiot lebanese who mislead the terrorist bashar with the word they have been saying for months now... خلصت!