U.S. Says IS Buses Evacuated from Lebanon Heading Back Deep into Syria 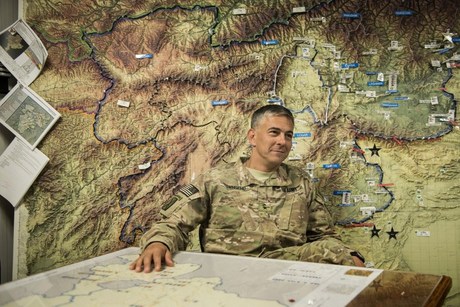 A convoy loaded with Islamic State fighters evacuated from the Lebanon-Syria border region was headed back into deep Syria on Thursday after being blocked at the Iraq border, a top U.S. general said.

Lieutenant General Stephen Townsend, commander of the counter-IS coalition in Iraq and Syria, said the convoy of buses and vans carrying hundreds of fighters but also women and children had turned around after being restocked with food and water from forces allied with Syrian President Bashar al-Assad.

Townsend confirmed that the coalition had blocked the convoy just short of the border by bombing the road and a bridge leading from the Syrian town of Hmaymah to the IS-held town of Albukamal further east.

He also said the coalition had attacked Islamic State vehicles that emerged to link up with the convoy.

But he stressed that, with non-combatants believed inside the vehicles as well, "we have not struck this convoy at all."

"I'd very much like to get at the ISIS fighters on that convoy," Townsend said.

The convoy was headed back into Syria Thursday afternoon local time.

"We're just letting them go. If they try to get to the edge of ISIS territory and link up with ISIS there, we'll work hard to disrupt that," Townsend said, using another designation for the Islamic State group.

The IS fighters and civilians were evacuated Monday from the border region between Lebanon and Syria under a ceasefire deal led by Hizbullah.