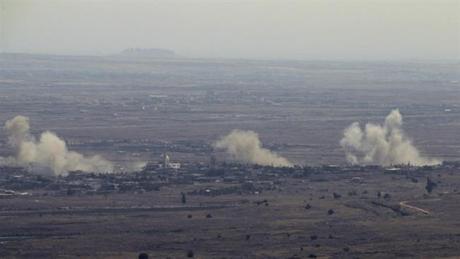 Syria's army said Israeli air strikes on Thursday killed two people at a military facility in the country's west, and that the missiles were fired from Lebanon's air space.

The army said the air raid targeted a facility near the western town of Masyaf, close to the Mediterranean coast, a stronghold of President Bashar Assad.

The army said the Israeli warplanes fired several missiles while in Lebanese air space, and warned of the "dangerous repercussions of such hostile acts on the security and stability of the region."

While largely staying out of the Syrian civil war, Israel has carried out a number of airstrikes against suspected arms shipments believed to be headed to Hizbullah, which is fighting alongside President Bashar Assad's forces.

Rami Abdurrahman, who heads the Britain-based Syrian Observatory for Human Rights, said two facilities were hit, a scientific research center and a nearby military base where short-range surface-to-surface missiles are stored. He said the attack killed two people and wounded five.

"Many explosions were heard in the area after the air raid," said Abdurrahman, whose group relies on a network of activists across the country. He said some of the blasts may have been secondary explosions from a missile storage facility being hit.

He said Hizbullah fighters and Iranian military officials often visit the site. He said those killed and wounded were Syrians, adding that it was not immediately clear if there were casualties among Iranian and Hizbullah operatives.

The air raid came a day after a U.N. probe found the Syrian government responsible for a chemical attack in April in northern Syria that killed more than 83 people. It was not immediately clear if the facility struck Thursday was used for the production or storage of chemical weapons. Syria denies having or using chemical weapons.

In 2013, Syria said Israeli warplanes carried out an air raid on a scientific research center in the Damascus suburb of Jamraya.

The Butcher will once again yell: "we warn you for the last time".
He only knows how to kill his own people.

"ado.australia:
Yes... Israel now needs permission from Russia to fly in Syria and Lebanon and even in northern Israel! S-400 is a game changer and now only the US F22 raptors can do anything without Russian permission! S-400 missile defence systems are now being installed that can knock out any fighter(except US F22).... israel is even more upset as they now cannot even enter Lebanese airspace!!!! Maybe you can thank Turkey for this because now Israel is finally vonerable in Lebanese airspace!"

haha, it sure seems Russia gave its permission if we have to go by what ado said;)

This was a hezbollah rocket facility; now it is vaporized.
Well done

The "fierce response" of the Butcher will be against his own people.
A cowardish person.

The attack was carried out well inside Syria airspace.