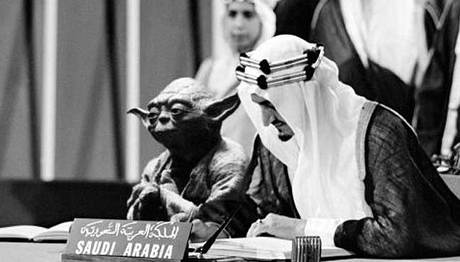 A Saudi education official has been sacked over a schoolbook that accidentally included a doctored photograph of a former ruler sitting next to a "Star Wars" character, triggering online ridicule.

The black-and-white image shows King Faisal, Saudi Arabia's third monarch, signing the United Nations Charter in 1945, with the diminutive Jedi master Yoda perched next to him.

The government has sacked Mohammad Bin Atiyah al-Harithi, the deputy education minister for curricula, saying that new versions of the textbook are being printed after the "inadvertent error."

"Education Minister Ahmed al-Eissa to terminate the mandate of ... Harithi and all those responsible for reviewing and approving textbooks," the education ministry said in a statement Monday.

The photo was a creation of 26-year-old Saudi artist Abdullah al-Shehri, who has gained renown for mixing pop culture icons into historic photographs.

Shehri said he was surprised to see his photograph end up in the school textbook.

He told the New York Times that he paired King Faisal and Yoda as they were both intelligent and because Yoda's green skin and lightsaber match the green of the Saudi flag.

He stressed he had meant no offense to the king, seen widely as the architect of Saudi Arabia's modernization.

One Saudi schoolteacher jested that this error symbolized "payback" after the education ministry introduced an extra hour of classes in schools earlier this year.

"Remember when Yoda signed the United Nations charter back in 1945 with Faisal of Saudi, @starwars?

"Saudi Ministry of Education does!" one Twitter user said.