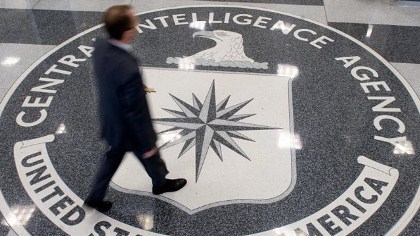 Tehran has arrested an alleged U.S. Central Intelligence Agency spy of Iranian origin before he could complete his mission of infiltrating the intelligence ministry, media quoted the ministry as saying on Saturday.

"Based on the scenario, he was supposed to infiltrate the intelligence ministry ... and feed it deceptive information on a large scale and spy on it," said a statement reported by the ISNA news agency.

"The Iranian-origin CIA agent received complex training, had worked as an analyst and also worked with the U.S. military in Iraq and Afghanistan," the statement added, without identifying him.

The man was first identified at Bagram Air Base in Afghanistan and arrested in Iran, the statement said, without identifying the man or saying when he was seized.

Several times in the past, Iranian officials have announced the arrest of suspected spies for the United States, but provided little information to substantiate the detention or allegations.

On Tuesday, Tehran's chief prosecutor Abbas Jafari Dolatabi said Iran had indicted 15 people on charges of spying for the United States and Israel, the Islamic republic's nemesis, without providing any details.

In May, the intelligence ministry announced the arrest of 30 CIA "spies" allegedly engaged in espionage and sabotage.

It provided few specifics beyond saying the alleged ring promised US visas and residency to educated Iranians in several Muslim countries in a bid to gather information on Iran's infrastructure and its nuclear, aeronautic, defense and bio-tech sectors.

Iran regularly accuses the United States of seeking to undermine its regime through covert operations.

Evidence of part of the U.S. spying program towards Iran came to light last week when Tehran displayed a US reconnaissance drone it said it had captured.

U.S. President Barack Obama on Monday acknowledged Iran had the drone, a sophisticated and stealthy RQ-170 Sentinel, and requested its return, which Iran has refused.