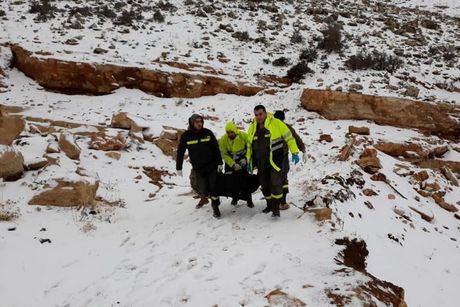 Bodies of two Syrians were found dead on Saturday raising the toll to 15 dead while trying to flee war-torn country into Lebanon trying to cross the mountainous frontier between the two countries.

Thirteen Syrians were found dead on Friday after they were caught in a fierce snowstorm, the Lebanese Army and Civil Defense said.

"They died of the cold. They included children, women and men," said Georges Abou Moussa, head of operations at the Lebanese Civil Defense.

In a statement, the army said it had received a tip Friday morning that a group of Syrian refugees had got stuck in snow while trying to cross the mountainous frontier between the two countries.

According to the statement, troops also arrested two Syrians who were involved in trying to smuggle the refugees across the border near Masnaa.

Lebanon, a country of four million, hosts just under a million Syrians who have sought refuge from the war raging in their neighboring homeland since 2011.

Many live in informal tented settlements in the country's east and struggle to stay warm in the winter.

Lebanon and Syria share a 330-kilometer border with no official demarcation at several points.

But Lebanese authorities introduced new restrictions in 2015 in order to curb the number of Syrians entering the country.