Bassil Says FPM to Have Biggest Bloc in Parliament 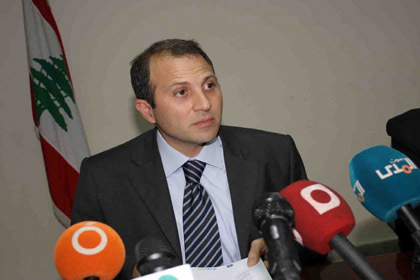 Foreign Minister Jebran Bassil, the head of President Michel Aoun's Free Patriotic Movement, has announced that the FPM won at least 29 seats in parliamentary elections, making it the largest bloc in the assembly.

Bassil told reporters that their bloc could end up having 30 seats. The bloc will comprise allied businessmen, the Armenian Tashnag Party and MP Talal Arslan.

Bassil said the bloc would maintain its "strategic alliance" with Hizbullah.

The FPM was the second largest in the outgoing parliament after Prime Minister Saad Hariri's bloc, which had 32 seats but appears to have lost a third of them in Sunday's elections.

Hariri is likely to remain in his post, but Hizbullah and its allies appear to have gained enough seats in the 128-member legislature to veto legislation.

Never has one person done so much harm to an entire country and for generations to come by selling Lebanon's freedom, democracy and dignity to the Basij-Assad criminals for 30 pieces of Silver in the Faustian deal of the Century. History will witness that Orange and Yellow and a curse on Christian and Shiaa communities and the kiss of death for our economy, transparency and way of life.

Bassil Says FPM to Have Biggest Bloc in Parliament

lol yeah Talal Arslan is now an FPMer! The reality is this: The FPM had 20 seats prior to the elections and now they have 18. The Lebanese Forces had 8 seats prior and now have 16.

See how many of the 29 will still be around the bloc's table in six month. BTW he's the head of the FPM but can't tell the difference between the party and the block.

The reality is the following
The LF got more MPs thanks to the new electoral law
While the Fpm increased its mps from 17 to 21 and it’s blcok from 23 to 29.
Remember not to add Gilbert Zwein FARID Khazin and naa3imtallah Abi Nasr as fpmers.
At the end Minister Jobran Bassil will head the largest parliamentary block.

yes at least i m real, not fake like you Terrorist

You're real?? Man it must be hard going through life a stick figure in 2d like that.