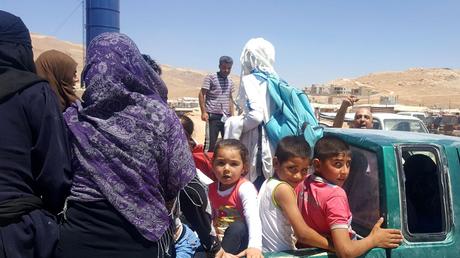 More than 1,000 Syrian refugees in Lebanon’s border towns of al-Qaa and Arsal will be repatriated to Syria under a “Hizbullah mechanism to help refugees return home, in coordination with Lebanese authorities and Damascus,” media reports said on Friday.

General Security chief Maj. Gen. Abbas Ibrahim announced on Thursday during the inauguration of a new General Security premises in Baalbek, that “a new batch of displaced Syrians will be returning home in the next days.”

Hizbullah official responsible for the refugees file, MP Nawwar al-Saheli, told al-Joumhouria daily: “A good number of applicants have signed in to return in nine reception centers established by Hizbullah in the South, Bekaa and Beirut.

“Many other Syrian refugees residing in the North and other Lebanese regions are inquiring about the mechanism for return,” added al-Saheli.

Early in July, Hizbullah leader Sayyed Hassan Nasrallah announced that the party was creating a mechanism to help Syrian refugees return home, in coordination with Lebanese authorities and Damascus.

The group has set up reception centers with phone numbers and social media accounts where refugees could sign up to return home.

“The displaced are from various Syrian regions and from various political orientations,” added Saheli, indirectly referring to media reports alleging that only pro-regime refugees were permitted to return home.

He said the return is taking place in “coordination with Lebanon’s General Security and the competent authorities in Syria.”

“As soon as the logistical procedures are complete, the first batch will move to Syria through Hizbullah within a couple of weeks,” he added.

On accusations that Hizbullah is taking over the State’s role in that regard, he said: “We have uselessly waited for a long time. When the State restores its actual role, then we will be at its service.”

This is a job for the international Red Cross under Lebanese supervision, not for an Iranian-funded sectarian terrorist organization subtituting for the State.

I respect Mr. blablablabla for its cross words ability.

liberating occupied lands by the zionist "state", protecting the country resources, like water and expelling the terrorists from the eastern border, now has to coordinate the return of Syrian refugees who were forced to leave their country due to the terror of Daesh, the Saudi/American-led thugs.

Did the Saudi/American/Zionist global coalition force the people of Qusayr and Qalamoun to leave their homes or was it your iranian militia who destroyed their homes, occupied their land, massacred their people, and now holds military parades in Qusayr?

Thank you southern for being patriotic and for posting as such.

I had no idea the resistance liberated occupied land, protected the country's resources, and expelled the terrorists. Your post opened up my eyes to what has now become fact: I have been reading Fake News for the last 5 years or so!

I am thankful to you for having the courage to tell the truth no matter what the consequences might be.

You have molded me into the young man that I have become. I owe you....

Please, keep posting because the World is Listening.

I have the utmost respect admiration for Mr. Southern because he is iranian and patriotic.

The same terror criminal militia that made these people refugees in the first place is now replacing the Lebanese state in coordination with Abbas Ibrahim to repatriate these poor refugees.

Your parents couldn’t keep up with your school tuition fees?

You sound awfully like the fake Southern Portuguese troll. Now ‘live’ the grownups alone and go ‘harcelate’ mama and papa to watch PJMasks and Ben10.

Parents in his segment of society have little say SOS, its more of an intrinsic thing they develop from being constantly bombarded with the thoughts of killing and death from their Ayatolas of hate.

Bala3aqil, have you ever wondered how your so called love for the so resistance tolerates the fact that they have not fired a bullet at Israel in years? yet they seem to be happier killing their so called brethren under the same religious faith? Does that not trigger an ounce on thought on either Kizb lacks faith in Islam or simply appreciates the Jewish faith more?
Before you call people Daesh supporters here make it clear where you stand to your self.

@blablablabla
So a 'smart' phone auto-corrects the word 'sold' and makes it 'solded'?

loool yes Lubnani; must have been a smart shia programmer who programmed @blablabla's not so smart phone:)

Guys guys you don't get it!!

Phone companies like Apple and Samsung make two versions of every phone: One for normal people with normal autocorrect and another version for shia with a shia dialect.

Guys, you got it all wrong. Allow me to explain. By now, we all know that bla-bla-bla bla-bla is a genius, right? Well guess what, that genius is smarter than his smart phone and that’s why he corrects the auto spellcheck. Solded, harcelated, boughted, are accurate. We’ve been reading obsolete dictionaries and attending the wrong schools. Shame on us!

So let us get this right, Kizballah goes to Syria and helps the heinous despot giraffe necked ASSad to kill and displace several million people. Then turns around and claims they are repatriating 1,000 people? How dumb can agent oranage and Kizballah supporters be? Dont they stop and think that they are a party to one displacing more people in Syria than Israel has been able to do in the last 60 years?!!! yet they are proud to reinstate 1,000 people? Wow if that is another synonym for the work Hypocrites and traitors to the same cause they call the Palestinian case....