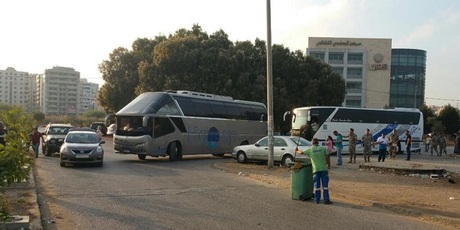 Hundreds of Syrian refugees returned to their homeland early on Tuesday, the latest group to return to Syria from its western neighbor, the National News Agency reported.

NNA said hundreds of Syrian families left this morning in buses from the northern city of Tripoli, the southern town of Nabatieh, from the Hasbaya towns of Shebaa and al-Arqoub and from the area of Bourj Hammoud.

The refugees have assured that Lebanon’s General Security -helping refugees return home in coordination with Syria- “have facilitated their return,” and affirmed their “eagerness to return back to their homeland.”

Russia has put forward an initiative to return hundreds of thousands of refugees to Syria, and hundreds have returned from Lebanon over the past months.

Lebanon is home to some 1 million Syrian refugees, a large number for a country of 4.5 million people.

The Russian initiative was proposed following the summit in Helsinki between U.S. President Donald Trump and Russian President Vladimir Putin, although it was not clear whether the U.S. supported the proposal.

Don’t be rude peace, they’re guests till bashar is ousted.