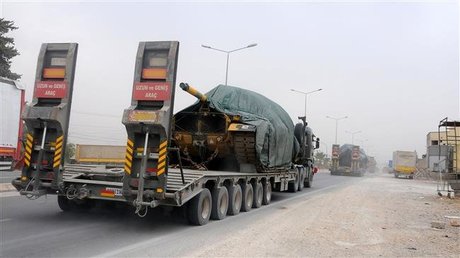 Turkish troop reinforcements entered Syria's rebel bastion of Idlib on Tuesday, an AFP correspondent reported, a week after a deal between Ankara and Moscow averted a government offensive.

Around 35 military vehicles travelled south down the main highway near the town of Saraqib after midnight.

The convoy was accompanied by pro-Ankara rebels of the National Liberation Front (NLF), who control part of the enclave on the Turkish border.

The Syrian Observatory for Human Rights, a Britain-based war monitor, said the forces deployed to several Turkish positions around the northwestern province.

Since last year, Turkish troops have manned 12 monitoring positions in the rebel zone under a de-escalation agreement between Turkey, Russia and fellow regime ally Iran.

Last week, Ankara and Moscow announced a new agreement for a demilitarised zone along the horse-shoe shaped front line between the rebels and government troops.

Hayat Tahrir al-Sham, a jihadist alliance led by Syria's former Al-Qaeda affiliate, controls more than half of the rebel zone, while NLF fighters hold sway over most of the rest.

The agreement gives Turkey the responsibility to ensure that all fighters in the planned demilitarised zone hand over their heavy weapons by October 10 and that the more radical among them withdraw by October 15.

The agreement also provides for Turkish and Russian troops patrol the buffer zone.

Last week, Foreign Minister Mevlut Cavusoglu said Turkey would have to send reinforcements to provide the numbers needed to conduct the patrols.

The Syrian civil war has killed more than 360,000 people and displaced millions since it erupted with the brutal repression of anti-government protests in 2011.