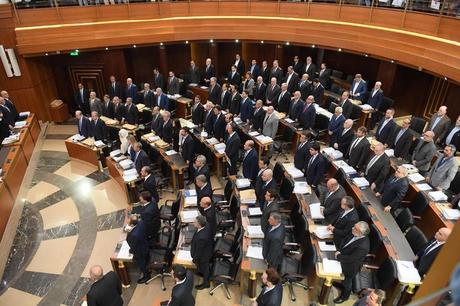 The legislative session kicked off at the Parliament on Monday chaired by Speaker Nabih Berri where lawmakers were set to endorse several draft laws, as the government formation process continues to stall, the National News Agency reported.

The Parliament endorsed a bill related to health care and medication, said NNA.

During the discussion of a 75-billion LBP credit to purchase medicine, caretaker Finance Minister Ali Hassan Khalil indicated that there were no budget reserves.

“Where will we get the revenues from to cover this amount?" he asked, saying that the bill is inapplicable.

Meanwhile, Berri replied saying: “It is applicable indeed, and the government is obliged to provide the funds.”

A debate erupted between Berri and ex-PM Najib Miqati over legislation in the absence of a government. The latter left the session afterwards.

“How can we legislate in the absence of the executive authority,” Miqati asked Berri during the session.

Upon leaving the meeting, Miqati said that “legislation of urgent drafts must be based on clear and specific criteria,” stressing on the lack on power balance as the current government is caretaker one.

"The current executive power is not qualified to discuss bills that are not urgent," he said.

"With all due respect to Speaker Nabih Berri, the Parliament has not taken the initiative to endorse urgent bills, and neither did it approve the non-urgent drafts that needed to be approved," he added.

Angered by Miqati’s remarks, the Speaker said: “You can read Article 69 of the Constitution.”

Efforts to line up Lebanon’s government have failed since May, amid divisions between political parties whether the Parliament should convene to legislate draft laws before the Cabinet takes shape.

Prime Minister-designate Saad Hariri’s mission has been delayed over several obstacles, the latest --related to the representation of the so-called Sunni MPs of March 8-- arose when the Cabinet was on the verge of formation.

Good one Berri. If your a Shiite and a follower of Berry Berry then you get a job, a loan and now free meds without paying a cent, why? because of two reasons hes in power and he can do it! you dont have to worry though because you will be involved ...making the payments!