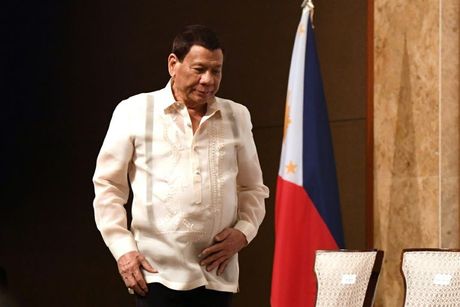 Philippine President Rodrigo Duterte on Thursday made light of his penchant for daytime dozes after his office said "power naps" had caused the gruff leader to miss a number of key meetings at a Singapore summit.

But on Wednesday, the mercurial leader missed four of the eleven meetings he was slated to attend, as well as a gala dinner hosted by Singaporean leader Lee Hsien Loong.

"What's wrong with my nap?" the 73-year-old told reporters as he arrived at the summit venue on Thursday morning for another long day of meetings.

Asked if he felt fully rested he replied: "Still not good enough, but enough to sustain the endurance for the last days."

Duterte's no-shows on Wednesday prompted a statement from his office explaining he had only had three hours of sleep the night before.

"He took power naps to catch (up) on sleep," presidential spokesman Salvador S. Panelo said, adding that "some quarters are making a big fuss of the president skipping a few meetings."

"We assure the nation that his aforementioned absence has nothing to do with his physical health and wellbeing which have been the subject of speculation," he added.

The outspoken leader remains popular at home even as he pursues a deadly drug war that has seen thousands killed and horrified western allies.

But he has regularly prompted theorising about his health by skipping events or discussing his ailments in public since taking power in 2016.

Duterte has said previously that he suffers from daily migraines and ailments including Buerger's disease, an illness that affects the veins and the arteries of the limbs, and is usually due to smoking.

Despite his deadly crackdown on drugs, he also revealed in 2016 that he used to take fentanyl, a powerful opiate painkiller, because of a spinal injury from previous motorcycle accidents.

He is the oldest person ever to be elected president in the Philippines, but he is far from the most veteran world leader attending ASEAN.

That accolade goes to Malaysia's Prime Minister Mahathir Mohamad, who is 20 years older than Duterte and currently the world's oldest leader.