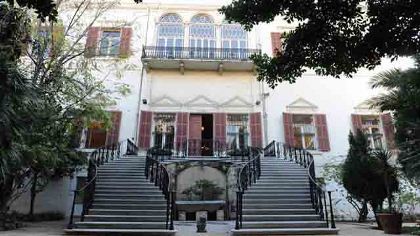 Lebanon’s foreign ministry condemned on Friday the Israeli violations against Lebanon’s sovereignty following Israel’s construction works on disputed points along the Blue Line near the Misgav Am settlement, the National News Agency reported.

“The Security Council should meet and the international community should deal with this clear and frank violation of Resolution 1701, as it did with the complaint made by the Israeli enemy,” a ministry statement said.

“Israel's violations constitute a flagrant violation of resolution 1701 and threaten stability in the south and the region,” it added.

On Thursday, Israel resumed the construction works to build a separation wall on disputed points along the Blue Line.

President Michel Aoun on Thursday called for an emergency meeting for the country’s Higher Defense Council to tackle the issue.

A statement issued after the Council's meeting said “the development is an attack on Lebanese territory and a blatant violation of Article 5 of Security Council Resolution 1701.”

But tunnels dug into Israel do not violate anybody's sovereignty.
The so called Lebanese Foreign Ministry is nothing but a mouthpiece for hezbollah, Syria and Iran.

He’s a foreigner agent himself....

If you compare the violations of Israel Vs Hezbollah I believe that Israel is on top. So Israel has the right to protect themselves but no one else? If there was a strong Government with an Air force, Air Defense system and all the other necessities that a country needs to protect its sovereignty there would not be a need for any one to claim they are defending Lebanon. So what you have is the result of a weak corrupt government controlled by others...

Israel violates Lebanese Airspace because Lebanon is in constant violation of 1701 by allowing the terrorist iranian organization south of the Litani river.

Much ado about nothing who pays them any attention? this council is about as useful as a sack of hammers.