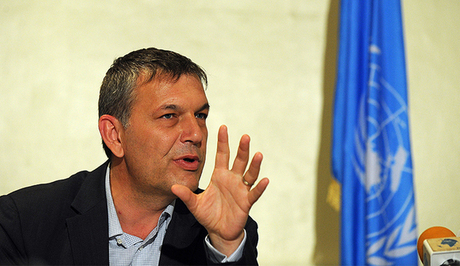 Philippe Lazzarini, Resident and Humanitarian Coordinator for Lebanon, said the Lebanese border with occupied Palestine is one of the “most stable” in the Middle East in recent years, and stressed that Lebanon and Israel “do not want war,” Asharq al-Awsat newspaper reported on Thursday.

The security situation on Lebanon’s southern border deteriorated in December after Israel launched operation “Northern Shield” aimed at destroying Hizbullah tunnels. This prompted a military alert on both sides of the border, followed by the resumption of Israeli forces building a concrete wall at conservative border points, which increased the tensions in the region.

In assessing the situation on the southern border after the tunnel crisis, Lazzarini said in an interview with the newspaper “the good thing in the southern border is that the two sides, so far, do not want war. As long as nobody wants war, then it won’t happen. We have to build on that,” he said.

“Over the past few years, the United Nations has reported to the Security Council on a regular basis and said that the mains risks lie in the risk of misjudgment shall things spiral out of control," he added.

However, Lazzarini emphasized saying “no one has an interest in escalation. I believe we have to work on things constantly.”

“The tunnel file is close to being a misjudgment, which requires collective vigilance in order not to head to that region of danger,” he added.

The resistance guarantee for survival depends on its ability to insure Israel is not threatened or harmed. No change for Lebanon but if Israel does intend to break that truce then the bearded goat will threaten to raise Gabriel's gates again...from 400m below the ground.

Israel left Lebanon in 2006 out of the kindness of its heart? Not because of RPG-29's? And are you threatening the resistance with extermination? You might very quickly find yourself doing it all by yourself.

For the next 500 years Kizballah supporters will continue to take credit for Israels withdrawal from Lebanon in 2006. Consider that Israel never planned on staying in Lebanon and could not afford to sustain the cost of doing so would be a huge driver for the length of stay. The IDF costs per day per soldier far exceed paying two dozen unemployed brainwashed dweebs who are desperate enough to want the $200 to $500 a month prospect that will eventually result in their death. Its a different business case where Israeli families want their sons and daughters home while Kizballah parents want to earn money by sending their kis to war.