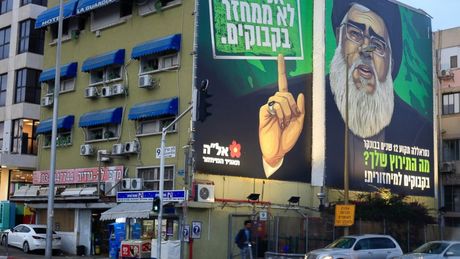 Hizbullah leader Sayyed Hassan Nasrallah has invaded the Israeli city of Tel Aviv — as the face of an eye-catching, satirical new recycling campaign.

Above Nasrallah's head reads the caption: "I don't recycle bottles." Beneath him, the poster says: "Nasrallah has been stuck in a bunker for 12 years. What is your excuse?"

ELA, Israel's recycling company, was not immediately available for comment.

Nasrallah has rarely been seen in public since a 2006 war between Hizbullah and Israel, apparently because of concerns he might be targeted in an Israeli attack.

The U.S., EU and Israel consider Hizbullah a terrorist organization.

Funny you don't have a problem when your nasrallah quotes Israeli 'propaganda' news sources?!

lol @ the shia iranian who has a say in lebanese matters

Now that Israel has recognized Nasrallah as the defacto elected leader of Lebanon, since he's the recognized leader of its majority community, the Shias (per Noam Chomsky), Lebanon's days as a landing craft in the Christian Armada are numbered. Gandhi: first they ignore you, then they mock you, then they fight you, then you win. Israel, as usual, has it out of order, but it's working. But the bigger warning to Lebanon's pro-Christian "constitution" was when Christianity died out in Europe last century. Chesterton: "It's not that Christianity has been tried and found wanting, but that it hasn't been tried." Europe has stopped trying.

Yes Israel and the rest of the world has recognized the bearded goat as a terrorist, who lives in a sewer and protects Israels interest to stay alive...whats your excuse mr bigot?

Chris, how did you get to the conclusion that Nasrallah was recognized by Israel as the defacto elected leader of Lebanon? The only thing that Israel has recognized Nasrallah as is as a coward who cannot recycle because he's stuck hiding underground in a bunker. But you are too stupid to understand this simple clear fact. Even Noam Chomsky would agree. And this time he would actually be correct.
Chesterton: "The true soldier fights not because he hates what is in front of him, but because he loves what is behind him." Nasrallah has shown that he's not a true soldier just a coward who went into a bunker after starting the war in 2006 on Iranian orders. He din't care about the consequence of this action on the lives of the Lebanese people as a whole or Shiia community he claims to love in particular. Nasrallah is nobody's leader he's a lackey.

You do know that Chomsky you so adore and quote is a yid right Ali?

YaskY, he doesn’t mind. Remember that Shiism was founded by Abdallah ibn Saba, a Yemenite Jew.

Finally, Yasky, are you a polish jew or a russian one? :)

Or as the Jesuit says, "God is always greater." Deus semper maior.

What’s our excuse in Beirut for not recycling? Burning or burying trash Has never been a durable solution , we need to recycle just like any normal country does.

Lebanon should use blablablablabla's deep and wide luv tunnel to recycle bottles, barrels, hoses, etc. It is free for the taking.

Speaking of which, the only time he penetrated a lady was when he visited the Statueof Liberty.

Was Nasrallah paid in Shekels or in Dollars for this ad and was he hired through the Clémentine ad agency?