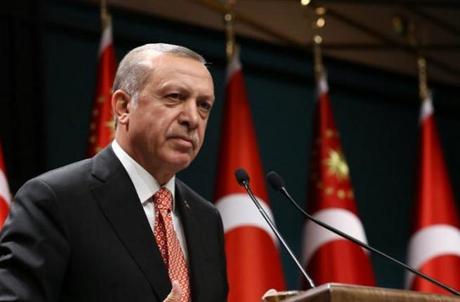 Turkey's President Recep Tayyip Erdogan on Friday condemned the deadly attack on two mosques in New Zealand, saying it illustrated the growing hostility towards Islam "idly" watched by the world.

The attacks on the Christchurch mosques left at least 49 dead, with one gunman –- identified as an Australian extremist -- apparently livestreaming the assault and publishing a manifesto online.

"With this attack, hostility towards Islam, that the world has been idly watching and even encouraging for some time, has gone beyond individual harassment to reach the level of mass killing," Erdogan said at the funeral of a former Turkish minister.

Turkish media reported the manifesto contained specific references to Turkey and ridding the famed Hagia Sophia in Istanbul of its minarets. Now a museum, the building was once a church before being turned into a mosque during the Ottoman empire.

"It is clear that the understanding represented by the killer that also targets our country, our people and myself, has started to take over Western societies like a cancer."

The Turkish leader, who often criticises Islamophobic attitudes, called for the West to act to prevent similar attacks.

"If measures are not taken right away, news of other disasters will follow this one... I am calling on the world, in particular the West, to take quick measures," he said.

He had earlier condemned the attack on Tweeter: "May Allah have mercy on the victims and grant a speedy recovery to the wounded."

His spokesman Ibrahim Kalin called it a "fascist" attack that "shows how anti-Muslim rhetoric and hatred leads to murderous acts. The world must break its silence over Islamophobic hatred".