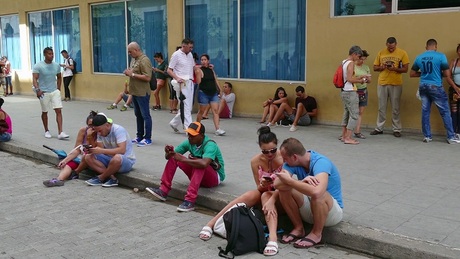 Cubans are using new found social media muscle to challenge their leaders in ways hitherto unseen on the communist-run island.

Using Twitter to snipe at once-untouchable ministers over government failures is catching on in a country whose leadership once demanded, and got, total unity.

"This confluence of people entering the social networks -- with the leaders within reach of their keyboards and being able to tell them what they think -- has changed the dynamics of Cuban society," says Cuban Twitter influencer Camilo Condis.

It suddenly put the internet within reach of anyone with a mobile phone.

President Miguel Diaz-Canel said on his election in April that dragging Cuba into the modern online age was a top priority.

Analysts say he is now experiencing the other side of the coin -- rolling criticism of his government.

Cuban citizens first saw the power of social media in January as they picked up the pieces after a powerful tornado devastated large parts of Havana.

Residents mobilized on WhatsApp to help thousands of disaster victims, for once without waiting for the state to react.

"Nobody knew each other before but we contacted each other through the social networks," says 29-year-old Aida Duarte, who coordinated donations of food and material.

"We started to get out there and we created a WhatsApp group to get organized."

The strength and efficiency of the public reaction took the authorities by surprise in a country where the state has sole authority to coordinate labor.

"The social networks put a bit of pressure" on the state, Duarte says.

"I think that this civil society was already there, but it did not have the means to organize and communicate. Now it gets the message out there thanks to mobile internet," says Condis.

Diaz-Canel, 58, became the first Cuban leader to use Twitter when he opened an account in August. He made his embattled Socialist counterpart in Venezuela, Nicolas Maduro, and Bolivian ally Evo Morales, his first follows.

The president instructed his government ministers to make themselves more visible on the social networks. They did, but increasingly, Cuba's 11 million people can tweet back, often with a bit of bite to boot.

Cubans' embrace of the internet has led to sharper criticism of the socialist government as many social media users challenge ministers over day to day problems.

One user slammed Canel-Diaz for still riding the wave of Fidel Castro's revolution -- talk of 1959 simply won't do in modern Cuba, was his message. Another thanked him for steering the country towards a "prosperous socialism".

Before the roll-out of 3G technology in December -- opening up the online world to the country's 5.3 million smartphone users -- the internet was available to the general public only via wifi hotspots, payable by the hour.

Small-business owner Condis has built a following in Cuba by constantly questioning ministers and authorities on everyday problems facing Cubans.

"I'm pretty critical but I do it with respect and a modicum of common sense," says Condis, who claims several ministers -- including Communications Minister Jorge Luis Perdomo -- have blocked him on Twitter.

A source close to the government acknowledged that ministers still have a lot to learn about communicating on the social networks.

Cuba has been long accustomed to political unanimity -- more than 97 percent voted for the current constitution in 1976, 99 percent in a later referendum.

However, Cuba's embrace of social media is now shaping a different kind of civil society, one more inclined to express itself.

Last year, new restrictions on the emerging small business sector sparked an outcry on social media, and were later modified.

"Now people have the opportunity to send a tweet to a minister or the president," said political scientist Carlos Alzugaray, "and they've managed to force the government to rectify its policies."

"That's the new Cuba. But it's not counter-revolutionary. The majority of the Cuban population want things to improve," he added.

Cubans are not considering overthrowing the government, Alzugaray says, but are enthusiastically taking the opportunity to speak out if they think the government isn't doing its job.

"There's a civil society there that the government does not recognize as such, but it's there regardless," he told AFP.

"It's a challenge for the Cuban state apparatus which has never been confronted by that."