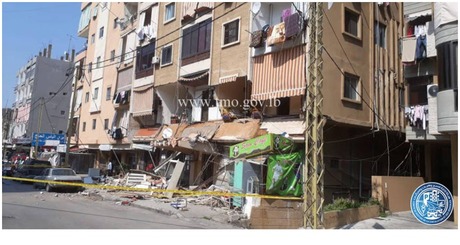 Parts of the facade of a residential building in the Sin el-Fil-Nabaa area collapsed on Thursday, causing no casualties.

Media reports said the building had been evacuated prior to the incident after residents sensed that something was wrong with the structure.

The incident forced the closure of the Saloumi-Nabaa road and traffic was diverted to neighboring areas.

Metn district officer Marlene Haddad and MPs Eddie Maalouf and Hagop Pakradounian inspected the scene in the wake of the collapse.

“We have allowed the building's residents to inspect their houses before evacuating them,” he added.

Luckily no one was hurt. I am sure we will be hearing about how this building was permitted and quality control programs employed during its construction lol.

The architect is responsible , nobody else is. The flats’ owners should take him to court...

Actually it's the civil engineer who must be responsible but not more than a 5 years period and this building looks like at least 30 years old (maybe more seeing it's architecture).

In many developed countries, the architect is responsible for his work even after he passes away, understand that his children and grand children inherit of the responsibility. After all, he picks the civil engineer and is responsible for the planning and construction from A to Z.

But what you're telling me here about the 5 year period is simply outrageous! By the time you get to court the unscrupulous civil engineer is cleared of all responsibilities. really, this should be modified to at least 50 years.

A video of its collapse can be seen here

So dramatic. Guess who’ll have to pay for the reconstruction? Not the owners, but the dawle (ya3ne everybody)