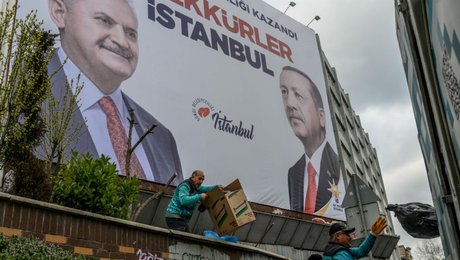 President Recep Tayyip Erdogan and his AKP suffered an upset in local elections when results showed the party lost the capital Ankara and was narrowly defeated in Istanbul, the country's largest city and economic hub.

In an interview with Fox Haber broadcaster, CHP opposition candidate Imamoglu said the difference between himself and the AKP's candidate, Binali Yildirim, was now 18,742 votes.

He said nearly 120,000 previously annulled votes had been recounted in 17 Istanbul districts, with 2,184 extra votes being allowed for Yildirim, and 785 for himself.

Imamoglu estimated the final difference could finish between 18,000 to 20,000 once counting ended, probably by Sunday. Nearly 200,000 more votes still need to be recounted, he said.

"It should be over by the end of the weekend," he told the station.

The AKP has said the recount will show its candidate won.

Election authorities provide ongoing recount details to observers from both parties to ensure transparency. Political parties have until April 10 to challenge the results.

A defeat in Istanbul would be especially sensitive for Erdogan who made his political career as mayor of the city. The AKP or its predecessors had held both cities since 1994.

Erdogan fought hard before the vote, holding rallies across Turkey where he described the election of mayors and district councils as a battle for the nation's survival.

But voters, concerned with the rising cost of living, double-digit inflation and unemployment, opted for the opposition in the country's two biggest cities.

AKP secretary general Fatih Sahin on Thursday said the party would also appeal to the Ankara provincial election board for the city's 25 districts for another recount.

After an initial recount in Ankara, Ozhaseki got 1,805 extra votes, prompting the party to appeal to the next level of electoral authorities as is allowed by law.

"This result is far from what we expected," Sahin said.

AKP spokesman Omer Celik on Thursday said the party would respect the results and congratulate the winners "once the people's will has been clearly seen".

AKP officials have said they believe there was a huge discrepancy in both cities between ballots cast at polling stations and the actual data sent to election authorities.