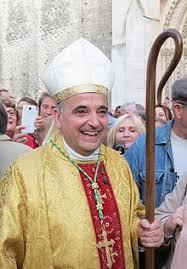 The Vatican on Wednesday accepted a voluminous dossier that puts French priest Jacques Hamel, who had his throat slit by Islamists in 2016, on the path to sainthood.

Dominique Lebrun, the archbishop of the northern French diocese of Rouen where the atrocity occurred, handed over the application, loaded into six heavy cartons, to the Vatican's Congregation of the Causes of Saints, an AFP journalist reported.

Cardinal Angelo Becciu, the head of the department that oversees beatifications and sainthoods, greeted Lebrun and a delegation of around 40 youths in an ornate hall lined with portraits of popes.

He said that while the department is currently considering some 1,500 applications, Hamel's was a "priority" for Pope Francis.

Hamel, aged 85, was conducting mass in the northern town of Saint-Etienne-du-Rouvray, near Rouen, when two 19-year-olds burst into the church and slit his throat in front of five worshipers on July 26, 2016.

The gruesome attack caused widespread horror, coming two weeks after a radical used a truck to crush 86 people to death in the southern city of Nice.

The teenagers, who had pledged loyalty to the Islamic State group, were killed in a police operation to free the worshipers, whom they had taken hostage.

Beatification is the first step on the path to Roman Catholic sainthood.

It is reserved for three categories of people: martyrs, those who have lived a life of heroic values, and others with a clear saintly reputation.

Applications for candidates deemed to have been a martyr for their faith need not demonstrate evidence of involvement in miracles -- one for beatification and another for sainthood.