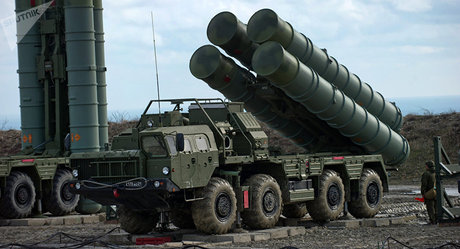 Turkey is "taking into account" NATO concerns over its Russian missile deal, the country's foreign minister said on Friday, in more conciliatory remarks over a purchase stoking tensions between Washington and Ankara.

The deal for Russian S-400 missiles riled Washington, prompting US officials to suspend Turkey's participation in the US-made F-35 jet programme and warn of more sanctions against its NATO ally.

Washington says Turkey's adoption of Russian missile technology alongside US fighter jets would not be compatible within NATO defences, citing security risks.

"We are taking into account NATO's concerns. It is not right to say Turkey is not considering them," Foreign Minister Mevlut Cavusoglu told a press conference in Ankara.

His remarks followed a visit by Turkey's defence minister to Washington and a meeting between US President Donald Trump and President Recep Tayyip Erdogan's son-in-law at the White House, where they discussed the S-400 deal, local media reported.

"We don't find credible the concerns that the S-400 system will allow access to the F-35 technology if they are deployed in Turkey," the minister said.

He said Ankara was still waiting for a US response to Turkey's proposal to set up a working group between them to work out differences over the Russian deal.

The S-400 purchase is one dispute fueling tensions between the two nations, who are also at odds over US support for Syrian Kurdish militias who Ankara brands a terrorist group and Turkish backing for US foe Venezuela.

This month, after repeated warnings, the United States said Turkey's decision to buy the S-400 system was incompatible with it remaining part of the emblematic F-35 jet programme.

Turkey had planned to buy 100 F-35A fighter jets, with pilots already training in the United States.

With Turkey in recession for the first time in a decade after a currency crisis last year, analysts say Ankara may look to avoid imposition of new US sanctions that would further damage the economy.

Last year, a trade dispute with the US prompted Washington to impose sanctions and tariffs on some Turkish goods, knocking around 30 percent off the value of the local lira currency.

Local Turkish media have reported Turkey may be considering options to ease tensions, such as the non-activation of the S-400 after delivery to Turkey, or the transfer of Russian missiles to a third country.