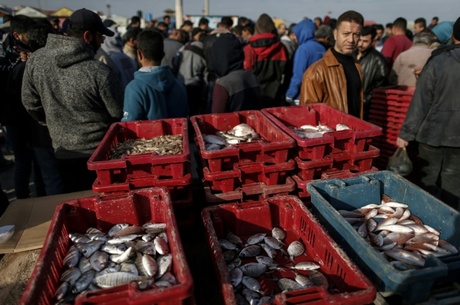 Israel reduced the offshore fishing limit it imposes for vessels operating out of Gaza from Tuesday following rocket fire from the territory by Palestinian militants, officials said.

A number of fishing boats came under Israeli naval fire early Tuesday, the fishermen's union said, after the military said they breached the fishing boundaries.

The union statement did not report any casualties.

Gaza fishermen will now be able to operate no more than six nautical miles into the Mediterranean, down from up to 15 nautical miles Israel had allowed since April 1.

COGAT, the Israeli defence ministry unit that oversees civil matters in the Palestinian territories, said the new limit would be in force "until further notice."

A COGAT spokeswoman said the decision was taken in light of a rocket launch from Gaza late on Monday.

A military spokeswoman said the rocket fell into the Mediterranean, a few kilometers (couple of miles) off the Israeli coast.

An army source told AFP that the rocket was fired by Gaza's second largest militant group, Islamic Jihad, an ally of the territory's Islamist rulers Hamas.

The source alleged that in recent weeks Islamic Jihad had been "taking steps to harm" efforts to maintain a ceasefire between Israel and Hamas.

But the source underlined that the evidence Islamic Jihad had fired the rocket would not affect Israel's longstanding policy of holding Hamas responsible as Gaza's de facto ruler.

"We still consider Hamas responsible for whatever happens in the (Gaza) Strip," the source said.

Zakaria Bakr, an official on the fishing union in Gaza, confirmed the reduction and accused Israel of attacking several boats in recent days, including Tuesday morning.

"A number of boats were sunk along with their fishing nets after being shot," he said in a statement, accusing Israel of breaching the terms of a recent truce agreement.

It was not immediately possible to confirm the claim.

An Israeli army spokeswoman said that a number of boats "deviated from the designated fishing zone" and the navy used "standard operating procedures" to push them back, without giving further details.

Israel had extended the fishing limit to 15 nautical miles in some areas from April 1 as part of a package of measures intended to calm a flare-up of violence with Hamas ahead of the April 9 Israeli general election.

The Gaza fishermen's union said the limit was then set at 15 nautical miles in the south near the Egyptian border, at 12 off central Gaza and at six in the north near the Israeli border.

Israel has fought three wars with Gaza militants since 2008 and has blockaded the territory for more than a decade.