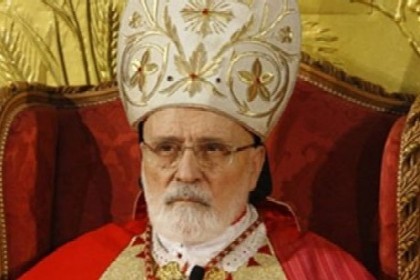 The visit has been rescheduled from May 9 to May 21, a Bkirki statement said, adding that al-Rahi wants to stay next to Sfeir.

The patriarch also asked the faithful to pray for Sfeir's recovery.

Later in the day, al-Rahi visited the Hôtel-Dieu de France hospital in Ashrafieh to check on Sfeir's health and slammed media reports claiming that the former patriarch had died.

Dr. Elias Sfeir for his part announced that the ex-patriarch's condition is critical yet stable, revealing that he is suffering from pulmonary and urinary tract infections.

"His blood pressure and heart are good and the kindneys are still working. He has suffered a septic shock and he overcame a similar condition last year, and God willing we will overcome it this time as well," he added.

He was elected Patriarch of Antioch for the Maronites on April 27, 1986.

What a sad moment, he was the patriarch of all Lebanese unlike the current one.

That's why Jouzou , your hero, called to beheade all christians during the civil war?

how how are Raqqa or bora bora caves ?

it is "Tora Bora" ya heretic!

lol @blacacabla
The Joke of the Day
Like Everyday

I wouldn’t mind French Polynesia, they say it’s heaven on earth ya illiterate and illegitimate. I leave Raqqa, Dahye, Baghdad and Qom for you.

RIP he was one of the better pontifs, but since he was not willing to obey Syria he was pushed aside many a time...

As Sayyed Hassin Nasrallah's lawyer, confident and a long time Tayyar activist I solemnly swear that ex-patriarch Nasrallah Sfeir, no relation, sold Lebanon yo the Syrian as sure as General Michel Aoun did not run away in his pajamas leaving his wife and daughters behind because they could not fit in the get away vehicul with all the loot he was transporting. And Samir Geagea sold Lebanon to the Syrian as sure as General Michel Aoun did not make a deal with the Syrians and their lackeys and became their lackeys' lackey in exchange for all the legal proceeding against him be dropped and supporting his presidential bid. And he sure did not become president through the rifle of the resistance. And as OTV share holder and news fabricator I can confirm that future president Gebran Bassil did not become a multimillionaire on a minister's salary since becoming minister.

A great Man! Not like Al-Rahi the sell out!

Christianity is proved in the amount of illegal force it can bring to bear on a given person of a despised arbitrary social category. Christ himself was such a person.
There may be a flaw in my argument.
Christianity deserves special privileges because good is naturally weaker than evil.
How about that one? No, still weak.
Christianity: the quality goes in before the name goes on.
Borrowed that from RCA.
"If you were accused of being a Christian, would there be enough evidence to convict you?"