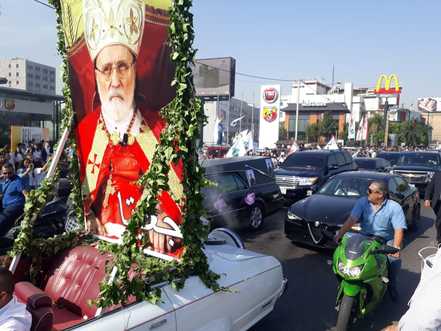 Patriarch Beshara al-Rahi presided a prayer service in Bkirki in mourning of Sfeir.

The convoy carrying the body of Sfeir departed early on Wednesday from the Hotel Dieu De France Hospital in Ashrafieh heading to Bkirki.

Scores of people lined the streets from Ashrafieh to Jounieh to pay their respects.

The Lebanese flag was flown at half-mast over the Presidential Palace in Baabda in mourning.

Sfeir, who was set to turn 99 on Wednesday, died on Sunday after days of intensive medical care.

Sfeir wielded considerable political influence during the country's civil war and was an ardent advocate of a Syrian troop withdrawal.

He became the leader of the church in 1986 until he resigned in 2011 due to his declining health, and held the title "76th Patriarch of Antioch and the Whole Levant".

He was a respected power broker during the 1975-1990 civil war, which saw bitter infighting between rival militias including opposing Christian factions.

Sfeir, who spoke fluent Arabic and French, was made a cardinal by Pope John Paul II in 1994.