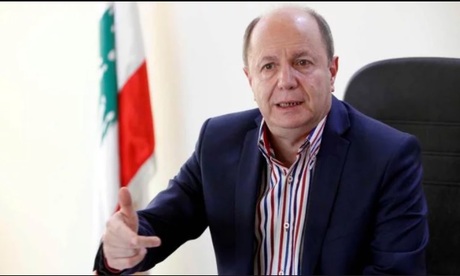 The insulting remarks made by the head of the General Confederation of Lebanese Workers Beshara al-Asmar about late patriarch Nasrallah Sfeir sparked wide nation condemnation calling for his detention.

“Asmar was summoned for interrogation for insulting Patriarch Sfeir,” according to LBCI TV station on Saturday quoting unnamed sources.

Justice Minister Albert Serhan said “the Central Criminal Investigation Department was instructed to initiate investigations to build on the matter.”

Serhan denounced the insulting remarks against a “great national and religious establishment, such as the late Maronite Patriarch Mar Nasrallah Boutros Sfeir.”

Asmar was unaware his microphone was on before the conference.

Several deputies, the Progressive Socialist Party, al-Mustaqbal Movement, the Maronite League and many others condemned Asmar’s remarks demanding that he would be removed from his post and detained.

Exactly! It's unionist gathering of communists. Always railing against the rich and the banks in every appearance.

He must have said that Sfeir sold out the Lebanese to France, eh?

Unaware that his microphone was on before a news conference, Asmar was heard joking with people sitting alongside him, making fun of the venerable patriarch one day before he was laid to rest.

"This one has become a saint now! I kept praying all night [to him] asking that hair would grow again on my bald head," Asmar said mockingly.

Father Abdo Abu Kasem, the head of the Catholic Media Center, lashed out at Asmar, slamming his "decadent" remarks.

You should not be alive ya heretic.

Get relevant or gtfo!

lol@ the shia 'Christian' of European parents and a very deep and wide luv tunnel.