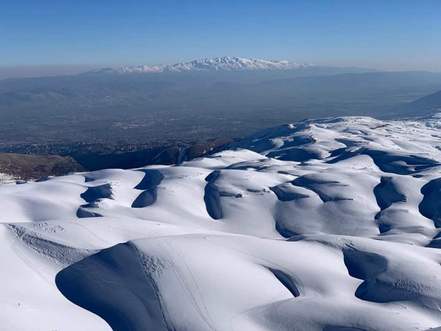 The Syrian army detained two members of the General Directorate of State Security after reaching the border between Lebanon and Syria while on a hiking trip in the Mount of Hermon, the state-run National News Agency reported on Tuesday.

NNA said the two security members were detained two days ago and were identified by their initials as R.Sh. and R.Aa of the State Security.

The two men were on a hiking trip in the heights of Mount Hermon adjacent to the town of Rachaya. They reached the Lebanese-Syrian border where the Syrian army is positioned in that area and crossed the border by mistake. They were arrested and taken inside Syria, said the agency.

The agency reported that contacts between Lebanese and Syrian authorities are ongoing to guarantee the release of the two.

Such incidents are rare along the border, though smuggling between the two countries is widespread.

The agency reported that contacts between Lebanese and Syrian authorities are ongoing to guarantee the release of the two.

Syrian troops now control all the area along the border with Lebanon after evicting insurgents from some border areas over the past years.

Let's normalize relations with the criminal syrian regime.
Bassil is on it and he is filing a formal complaint to the United Nations.

How come we only hear of this today! This is a major incident. When will the LAF finally deploy around the border to defend its citizens and when will we finally build a wall around the Syrian lebanese border?

"Every time we meet, there is a vacant seat disrupting the joy of our Arab gatherings; it is no longer permissible for Syria to remain outside the Arab scope," Bassil added