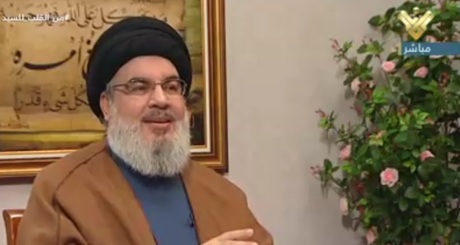 Hizbullah chief Sayyed Hassan Nasrallah on Friday called for pacification in connection with the deadly Qabrshmoun incident but stressed that his party “stands by its ally” MP Talal Arslan.

“From the very first moments after the Qabrshmoun incident, we started our contacts to pacify the situation,” Nasrallah revealed in an interview on al-Manar television.

“Stability in Lebanon is in our interest,” Nasrallah added, describing claims that Hizbullah “wants to blow up the Druze arena” as “immoral.”

“We call for pacification but we stand by our ally… Our ally was aggrieved and his men were killed,” he said, referring to Arslan and the slain bodyguards of State Minister for Refugee Affairs Saleh al-Gharib.

Describing Arslan’s call for referring the incident to the Judicial Council as “logical,” Nasrallah said “the decision is in our ally's hand and we stand by him.”

“We are against the suspension of the cabinet,” he said.

As for the relation with Progressive Socialist Party leader Walid Jumblat, Nasrallah said: “We did not err against Jumblat; he is the one who started the problem with us when he spoke about the weapons.”

Separately, Nasrallah revealed that the Trump administration is seeking “channels of communications” with Hizbullah through mediators.

Turning to Syria, Nasrallah confirmed that Hizbullah has decreased the number of fighters supporting the Damascus regime.

"We are present in every area that we used to be. We are still there, but we don't need to be there in large numbers as long as there is no practical need," he said.

The head of the Iran-backed group, which has been fighting in Syria since 2013, did no quantify the extent of the reduction.

Backed by Russia and Iran, the Damascus government has taken back large swathes of territory from rebels and jihadists since 2015, and now controls around 60 percent of the country.

Nasrallah said none of his fighters were currently involved in fighting in Syria's northwestern region of Idlib, where regime and Russian forces have increased deadly bombardment on a jihadist-run bastion since late April.

Nasrallah spoke after Washington announced fresh sanctions Tuesday against Hizbullah, targeting elected officials from the movement for the first time.

"All dealings with the Syria file have nothing to do with the sanctions or the financial austerity," he said.

Nasrallah also warned that U.S. ally Israel would not remain intact if a war broke out between the United States and Iran.

"Iran is able to bombard Israel with ferocity and force," he said.

His remarks came after weeks of increasing tensions between the United States and Iran as U.S. President Donald Trump steps up his war of words with the Islamic Republic.

"When the Americans understand that this war could wipe out Israel, they will reconsider," Nasrallah said.

"Our collective responsibility in the region is to work towards preventing an American war on Iran," he said.

He also warned that Saudi Arabia and the United Arab Emirates had no interest in a conflict erupting.