Kataeb Calls for ‘Radical Reform’ and ‘Reinstating’ the Political Authority 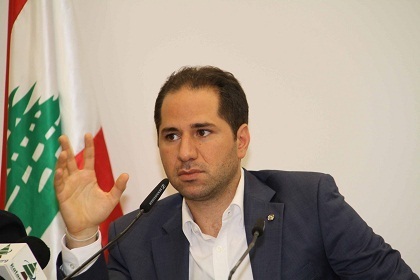 The Kataeb party criticized the newly endorsed 2019 state budget warning that the country faces the danger of “collapse” if radical reforms were not reinstated.

“Kataeb party regrets what the 2019 state budget has reached in the Parliament. Instead of stopping the waste of public funds, it imposed new taxes on citizens. Instead of shutting down the illegal crossings and stopping tax evasion, it swooped on the rights of retired servicemen,” said Kataeb chief Sami Gemayel at the weekly politburo Kataeb meeting.

The opposition Kataeb chief added: “The country stands in front of two choices, either a radical reform or collapse. No compromises. The situation is dangerous and intolerable to procrastinate.”

Gemayel renewed the party’s demand for “early elections which will give rise to a fair, effective and capable authority to manage the country.”

“Kataeb calls for the implementation of the decisions of the table of dialogue in terms of Palestinian disarmament inside and outside the (refugee) camps, and the application of Lebanese laws, especially the labor law, on Lebanese nationals, displaced persons and refugees,” he added.

Lebanese politicians are making fun of people, they still think people are idiots or ignorants, and let me tell you why: In the projected 2019 budget, they predicted a total deficit of $4.5 billion for the year, which is 7.59%. So far since January, the deficit is $5.1 billion or 8.5%.
How do they expect to achieve a total deficit of 7.59% in less than 6 months while so far it is already 8.5%? Based on actual numbers my projected deficit will be over 11% for the year!

Turkey is a respected industrial country with a very strong economy, yet the Turkish Lira lost 45% of its value in less than 4 months. It recovered a bit now, but still down more than 30%. Lebanon has no economy nor stands as a significant exporter, I wouldn’t rule out the possibility that the US$ might hit 100,000 LP once the Central bank removes its safeguard and freezes the local currency as requested by the World Bank and the IMF.

It was a sarcastic number! I actually meant the LP is going to hell very soon. ;)

You had me wasting about 5 minutes of time that I will never get back. You started out with some logic then I realized you said that Turkey had a "very strong economy" lol then you said they lost 45% of their currencies worth. I would suggest before you start dissecting economies and providing your synopsis on simple compound depreciation check your logic and it may not hurt to understand that a loss of 45% of your currencies value does not quite place you in a "very strong" category. That said fear non the political authorities in Lebanon have your "very strong" sense of financial understanding.....

It is advisable that before trying to judge the opinions of others, you take a moment to observe the comparisons that might have been made to base the analysis that inspired the statement. However I didn't expect an ignorant person to understand the point.