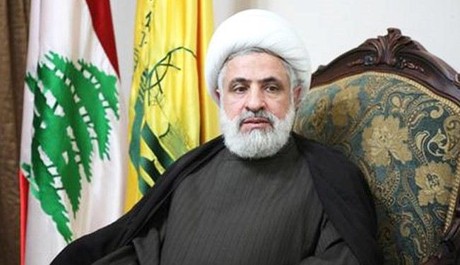 Hizbullah is ruling out a wider war with Israel but says it will carry out a surprise attack in retaliation for an alleged Israeli drone assault south of Beirut over the weekend.

Naim Qassem told Russia Today in an interview that aired late on Tuesday that Hizbullah will not be "intimidated by threats of war in order not to retaliate. There was an aggression and we said we will retaliate and this is what will happen."

He refused to elaborate, saying that "we want the strike to be surprising and therefore, it is not in our interest to reveal more details."

Qassem's comments came just days after an alleged Israeli drone crashed in a Hizbullah stronghold in southern Beirut while another exploded and crashed nearby.

Yet his terrorist shia boss was barking his head off yesterday.

Everybody knew you were nothing but cowards and only flex your muscles on unarmed civilians in Lebanon, Syria, Iraq and Yemen.

Gotta respect anyone who has a diaper on his head! he has guts!

Strange! When will the shia terror group liberate Shebaa farms, Palestine, and destroy the zionist enemy?

Nasrallah and his terrorist organisation Hizballah should know one simple fact.
If a war breaks out with Israel it is only because they are pulling the lions' tail. Israel will not allow him to dictate military action.