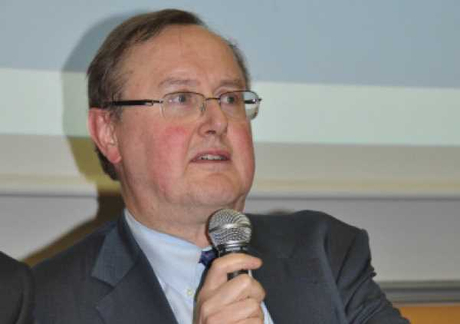 Pierre Duquesne, the French inter-ministerial delegate for the Mediterranean who is in charge of following up on the implementation of the CEDRE conference resolutions, stressed Thursday that none of the donors has decided to block funds earmarked for Lebanon.

“I have not heard donors telling me that they will refrain from offering funds to Lebanon. It is true that they have some skepticism, which has surged in recent weeks and months, but they are still ready to offer support,” Duquesne said at a press conference wrapping up a visit to Lebanon.

“The goal of the reforms should not be to appease the foreign countries but rather to serve the Lebanese people and institutions and to revive Lebanon’s economy,” he added.

Noting that oil and gas exploration is not “the magical solution that will resolve all difficulties,” the French diplomat said “this is a positive thing but we have not reached it yet.”

“This is a false hope and is not the right path forward,” he warned.

He added: “We must remember that 60% of the deficit comes from Electricite du Liban and accordingly action is needed regarding this issue.”

Duquesne also lamented that the international donors “have not seen a quick pace in implementing the reforms,” emphasizing that “the adoption of the 2019 budget was delayed and timeframes should be respected and abided by.”

"It is certain there is a great urgency, that is something everyone agrees on, because there is not a single economic indicator that is not negative," he added.

To reduce the budget deficit, "the bulk of efforts must focus on (public) spending," he said.

He also called for tax hikes.

Lebanon has promised donors to slash public spending as part of reforms to unlock over $11 billion in aid and low-interest loans pledged at a conference dubbed CEDRE held in Paris in April 2018.

On Monday, Lebanese authorities declared an "economic emergency" after a meeting at the presidential palace in Baabda.

"We need to accelerate work on the CEDRE agreement," he told reporters.

He also stressed "the need to maintain the stability of the exchange rate of the Lebanese pound" against the dollar.

Growth in Lebanon has plummeted in the wake of repeated political deadlocks in recent years, compounded by the 2011 outbreak of civil war in neighboring Syria.

Standard & Poor's kept Lebanon's "B-/B" rating, but said it could still lower ratings over the next year if banking system deposits and the central bank's foreign exchange reserves continue to fall.

This is the ugly truth the corrupt and incompetent ruling class doesn’t want to hear. Fossil energy is a thing of the past and it should remain buried ... the planet is already over polluted.

talking about fossil energy, you should as well stop digging your love tunnel with Doodle's help

At least you would spare us, lebanese, from your stupid remarks