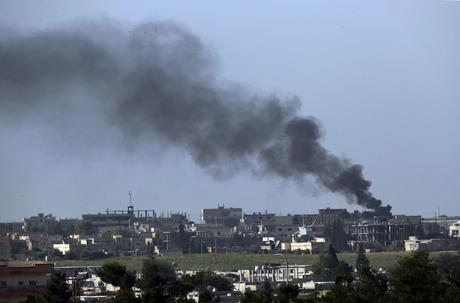 Turkish forces have taken control of the Syrian border town of Ras al-Ain, which has been a focus of its operation against Kurdish militants, the defence ministry said Saturday.

"As a result of successful operations within the scope of Operation Peace Spring, the town of Ras al-Ain to the east of the Euphrates has been brought under control," it wrote on Twitter.

Kurdish authorities denied the town had fallen to the Turks.

"Ras al-Ain is still resisting and clashes are ongoing," said an official of the Kurdish-led Syrian Democratic Forces.

An AFP correspondent in the area said Turkish troops and allied Syrian rebels had entered the town but had yet to capture it.

The Britain-based Syrian Observatory for Human Rights also reported that the town, a major target of the Turkish offensive, had yet to be completely taken.

Ras al-Ain and Tal Abyad have been the primary focus of Turkey's offensive launched on Wednesday against the Kurdish-led Syrian Democratic Forces.

Turkey has heavily bombarded the towns and made steady advances, prompting tens of thousands of civilians to flee.

The kurds are now finally feeling what thousands of innocent arabs felt when their villages were being bombarded from the air and land by superpowers. What goes around comes around.... karma.

lol why do you hate them so much ? If they get their Kurdistan people of Kurdish descents like Jumblatt and cousins can relocate there.

Actually, I don't hate them at all. But I have known of how prejudice and sectarian they are and how they massacred innocent Syrian civilians and burned their villages all under the pretext of fighting ISIS.

Oh well, there are extremists among them as well. One thing that disturbs me is that they’ve been taking some ISIS orphans to adopt them then embrigade them for their wars. But it’s sort of the lesser of the two evils, dont you think? There are lots of shades between black and white.
As you probably know, (one of) my ascendancies is ottoman, yet I have no misconception about the Kurds, I strongly believe they deserve their state and their life is much harder than Lebanon
‘s because they’re stuck between 4 bullying countries.

lol @ the shia 'Christian' of European Iranian parents from Nabatieh and a deep and wide luv tunnel that is open for penetration by the public year-round.