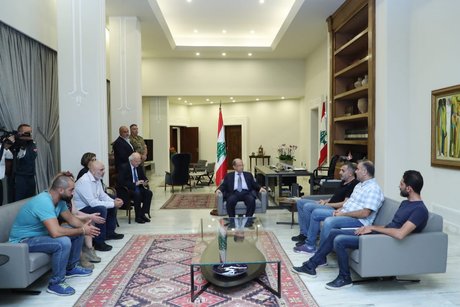 President Michel Aoun received Friday evening a delegation representing protesters and told them that he will do all he can to "ease your suffering,” media reports said on Saturday.

Aoun's office posted a photo of the meeting that consisted eight persons sitting with Aoun at the presidential palace in Beirut's southeastern suburb of Baabda.

The man added that they told the president that "the situation cannot continue this way."

Small numbers of protesters are attacking public and private property in the Lebanese capital of Beirut after security forces fired tear gas on demonstrators demanding the resignation of the government.

Young men Friday night attacked some banks and street signs in downtown Beirut in an area between parliament and government headquarters.

Thousands of people have protested around the country for the second day, closing major roads over proposed taxes by the government.

Tear gas is still being fired at protesters in Beirut at night after the vast majority of the protesters left.

The protesters attacked the policemen with stones, fire crackers and water bottles.

Another joke from Claoun... the man is an old, senile, egocentric case.
He wanted the chair.
He got the chair.
And his Administration is the worse in Lebanese History!
Let someone change his diapers, and let's kick him out of Baabda, and send him to a retirement home!
His place is not in the Presidential Palace!
He is disconnected from reality haram...

So, PR stunt and nothing substantial. Probably his party members in there too to make him look good.