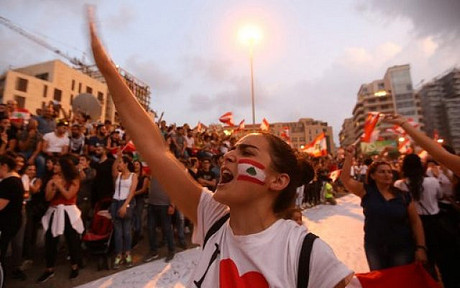 Lebanon's main parties have agreed to a reform package proposed by Prime Minister Saad Hariri, who had given his coalition partners until Monday to back it, a senior official said.

The country's top leaders replied on Sunday to Hariri's ultimatum, agreeing to scrap new taxes and privatise major companies, among other measures, a cabinet official told AFP on condition of anonymity.

On Friday, the second day of the country's biggest wave of anti-government protests in years, Hariri addressed the nation and gave his cabinet partners 72 hours to support his plan.

"He sent it to all factions and received their agreement, especially from the Free Patriotic Movement and Hizbullah, and tomorrow he will go to the cabinet to approve it," the official said.

The Free Patriotic Movement is the party of President Michel Aoun and his influential son-in-law Foreign Minister Gebran Bassil.

It is allied with Hizbullah, the movement led by Hassan Nasrallah, and together the two blocs and their allies control the government and parliament.

The cabinet official told AFP the plan was not intended to impose further taxes, but would include privatisation in some sectors.

Some of Hariri's traditional allies have however expressed reservations over the plan.

Aoun is due to chair a meeting of the Council of Ministers on Monday morning to discuss the plan.

Hariri's ultimatum Friday was largely perceived by protestors as a desperate attempt by the political elite to save their seats.

Hundreds of thousands of people gathered in Beirut and across the entire country Sunday on the biggest day of protests so far, demanding basic services, an end to corruption and an overhaul of the political class.

News that Lebanon's embattled cabinet was about to approve the economic rescue package left many demonstrators unimpressed on Sunday night.

"They have been lying for more than 20 years. We are fed up and we want all the politicians to go," said protestor Rana Medawar.

Top political leaders have reacted to the mass street mobilisation by warning that the government's collapse could lead to further chaos.

Lebanon is on the brink of economic collapse and the government had been weighing a raft of new taxes to shore up finances and secure $11 billion in aid pledged by international donors last year.

No more lies!
No more trust!
No more of this corrupted political class!
Resign!!!!!

They are addicted to stealing and corruption as an alcoholic is addicted to his bottle. They will promise anything and everything just to remain seated on the source of their addiction, but this time I hope we Lebanese won't fall again for these leaders fake assurances.

So even though Lebanon is a signatory to the UN Resolution 1701, what is the situation on the ground?
One half, Hizballah, couldn't give a damn about it and completely ignores it.
The other half, Hariri & Co., realise that they have no chance of implementing it so they too ignore it.
Now that is what people call a government for Lebanon.