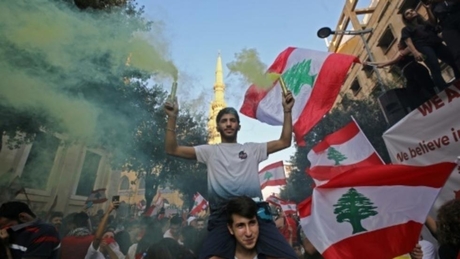 Tens of thousands of Lebanese protesters kept the country on lockdown on Tuesday, rallying for a sixth consecutive day to demand new leaders despite the government's adoption of an emergency economic rescue plan.

Demonstrations initially sparked by a proposed tax on WhatsApp and other messaging apps quickly grew into an unprecedented cross-sectarian street mobilization against the political class.

The movement has spread to all major cities and into Lebanon's vast diaspora.

The cabinet was spurred into passing wide-ranging economic reforms on Monday, but the move failed to win over protesters, who now seem bent on removing the entire political elite, which they see as corrupt.

Tuesday's protests initially seemed smaller than on previous days, but they swelled in the afternoon, with thousands gathering in central Beirut.

Protester Abdel Amir Ramadan, a 73-year-old from Beirut's southern suburbs, lamented the state of the country.

He was unconvinced by the government’s rescue plan, announced on Monday by Prime Minister Saad Hariri.

"They have been in power for years, why did they just wake up to these reforms now?" Ramadan asked.

"Today, the decisions are not in their hands. They are in the hands of the people."

Among the measures were a 2020 budget meant to bring the deficit down to 0.63 percent of GDP, without new taxes, along with a privatization program and projects to support the underprivileged.

The agreed reforms will also halve the salaries of current and former lawmakers and ministers.

A couple of dozen demonstrators shouted slogans in front of the central bank on Tuesday, despite the premier's announcement.

"Down with the rule of the central bank. We won't pay the taxes. Let the banks pay them," they chanted.

Heiko Wimmen, analyst with the International Crisis Group, said it appeared Monday's measures were not enough.

"These mostly technical solutions may put the country on a sounder fiscal footing, but they appear inadequate to the challenge of the protests, which now demand broader, systemic change," he said.

The country's main parties, including those of President Michel Aoun and the powerful Iran-backed Hizbullah, have warned of a political vacuum and supported the reform package.

"We believe, after the announcement of the decisions of the cabinet yesterday, that we're going to get very positive reactions" from the international community," senior Hariri adviser Nadim Munla told reporters.

Lebanon's economy has been sliding closer to the abyss in recent months, with public debt soaring past 150 percent of GDP and ratings agencies grading Lebanese sovereign bonds as "junk."

Fears of a default have compounded the worries of Lebanese citizens exasperated by the poor quality of public services.

On Tuesday morning, the Lebanese Army was trying to reopen a number of major roads that have been blocked by demonstrators for days, the state-run National News Agency reported.

In Beirut, volunteers cleaned up streets after euphoric crowds partied deep into the night on Monday, dancing to impromptu concerts and DJ sets.

It is unclear how long protests will last, but banks said they would remain closed on Wednesday, having shuttered last week as the demonstrations gained momentum.

Given the size of the gatherings, the six-day-old mobilization has been remarkably incident-free, with armies of volunteers providing water to protesters and organizing first aid tents.

Hariri seemed aware that the measures he announced would not quench the people's thirst for change, telling protestors on Monday the plan was not simply a "trade-off" to get people off the streets.

Lebanon fought a devastating 15-year civil war that ended in 1990 and many of the country's politicians today were formerly warlords fighting along sectarian lines in the conflict.

Outside of Lebanon, expats in Europe, the United States and Africa staged sit-ins and demonstrations in solidarity.

In Beirut, Mounir Malaeb, an elderly man from the southern city of Tyre who came to the capital to join the rallies, said the protest movement was "the only chance the people have."

"If we give the government another chance, we would be crazy," he said. "We have been giving them chances since the 1990s."

Progressive Socialist Party leader Walid Jumblat, a powerful politician who has representatives in the government, criticized the reforms as "weak drugs" that aim to buy time.

Sunnis support for Billionaires (Hariri and Miqati) has finally ended