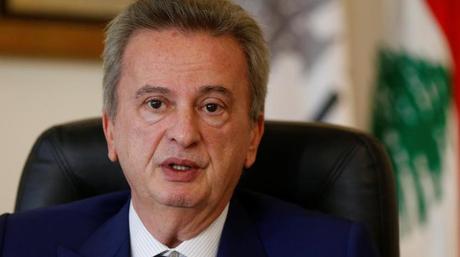 The governor of Lebanon's Central Bank sought to calm nerves on Monday amid a worsening economic and financial crisis, pledging to work on safeguarding the stability of the national currency and protecting bank deposits.

Riad Salameh told reporters at a packed press conference that the bank will keep defending the currency peg, stable since 1997. He said there won't be any capital controls or a "haircut" on customer's bank deposits, in which the state takes a cut of their money to cover its debts.

As he spoke, dozens of protesters outside the bank on Beirut's commercial Hamra Street blocked the road, chanting "down with the rule of the banks!" as riot police looked on.

Though it's still pegged at 1,500 pounds to the dollar, the Lebanese pound is trading at up to 1,900 to the dollar on the black market, a devaluation of nearly 30% from the official rate.

"The Central Bank aims to protect the stability of the pound and we have the capability to do that," Salameh said, acknowledging at the same time the difference in price in currency exchange shops, which he said was due to market demand.

He described it as a "phenomenon" that will go away when demand diminishes. Salameh added that the central bank has reserves of $38 billion — including 30 billion "that we can use immediately."

Salameh said Lebanon is a dollarized economy — and "if there are no dollars in the market, then we don't have an economy."

He said before the protests began, many Lebanese started saving cash in their homes and "according to our estimates these amounts are worth about $3 billion."

Salameh added that the central bank is allowing local lenders to borrow dollars with an interest rate of 20% to cover the needs of depositors but such money will not be allowed to be transferred electronically outside the country.

He said a mechanism has been put in place to protect deposits and keep banks afloat. He ruled out capital controls, saying the central bank does not have the legal authority to do that, but that banks should continue to do what makes sense in these "exceptional times" to manage liquidity.

Also Monday Lebanon's longtime parliament speaker Nabih Berri said there should be a new government that includes all groups in the country, including the protesters.

The main disagreement between rival groups is on whether the new Cabinet should be made up of technocrats or include politicians. President Michel Aoun has not set up a date for consultations with heads of parliamentary blocs to name a new prime minister.

Berri also postponed a parliament session that was scheduled for Tuesday to draft new laws related to, among other things, corruption and a general amnesty over security concerns. The next session is now scheduled for Nov. 19.

There have been calls by anti-government protesters for a general strike and for closing roads leading to parliament.