One Shot Dead in Khalde as Protesters Block Roads across Lebanon 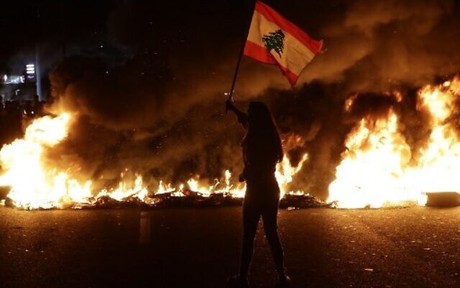 The victim "succumbed to his injuries" in hospital, according to the National News Agency, the second death in nearly a month of unprecedented protests that have erupted across Lebanon.

The army said in a statement that it had arrested a soldier after he opened fire in the coastal town of Khalde, just below the capital, to clear protesters "injuring one person."

Media reports said the soldier is the personal driver of an army colonel as protesters said he was driving a white vehicle with no plates.

The Progressive Socialist Party said in a statement that the man was one its members.

"In spite of what happened, we have no other refuge than the state. If we lose hope in the state, we enter chaos," he said.

Protesters are demanding the ouster of a generation of politicians they see as inefficient and corrupt.

In a televised address on Tuesday night, Aoun had warned protesters against continued blocking of roads and state institutions.

The government stepped down on October 29 but stayed on in a caretaker capacity and no overt efforts have so far been made to form a new one.