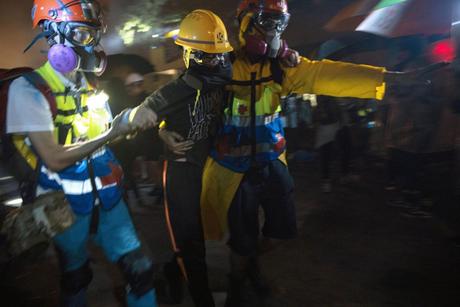 Pro-democracy demonstrators holed up in a Hong Kong university campus set the main entrance ablaze Monday after police warned they may use live rounds, deepening fears over how nearly six months of unrest across the city will end.

The violence extended a dangerous new phase of the crisis, which over the past week has seen schools shut down, roads barricaded and Chinese soldiers briefly leave their local barracks to clean up streets.

China has refused to budge on any of the protesters' key demands, which include free elections for the city of 7.5 million people and an end to the perceived erosion of liberties under China's tightening grip.

Beijing has instead repeatedly warned it will not tolerate any dissent, and concerns are growing it could intervene militarily to quell the unrest.

On Monday several loud blasts were heard around dawn before a wall of fire lit up an entrance to the Hong Kong Polytechnic University (PolyU), AFP reporters said, as what appeared to be a police attempt to enter the campus was repelled by protesters determined to hold their ground.

Police said they had fired three live rounds at a protest site near the university but no one appeared to have been hit.

Intense clashes on Sunday saw a police officer hit in the leg by an arrow and protesters meet police tear gas with volleys of petrol bombs.

At the besieged campus, protesters hunkered down under umbrellas from police water cannon, and hurled Molotov cocktails at an armoured vehicle, leaving it ablaze on a flyover near the campus.

Police declared the campus a "riot" scene -- rioting is punishable by up to 10 years in jail -- and blocked exits as spokesman Louis Lau issued a stark warning.

"I hereby warn rioters not to use petrol bombs, arrows, cars or any deadly weapons to attack police officers," he said.

"If they continue such dangerous actions, we would have no choice but to use the minimum force necessary, including live rounds, to fire back."

Hong Kong police routinely carry sidearms, but until now they have only used them in isolated incidents during running street clashes. Three people have been shot, none of them fatally.

Faced with large groups throwing bricks and Molotov cocktails, they have relied on tear gas, water cannon and rubber bullets, but the new warning suggests a more proactive use of live rounds.

Fear gripped protesters inside the campus -- whose occupation is a twist in tactics by a leaderless movement so far defined by its fluid nature.

One 19-year-old, who gave her name as "K", said there was desperation among the 200 demonstrators she estimated remained.

"Some people were crying badly, some were furious, some agonising, because they felt hopeless as we were left no way out of the campus.

"We don’t know when the police will storm in."

A few hundred metres from the campus, protesters erected barricades in the Tsim Sha Tsui and Jordan areas.

One 16-year-old, who gave his name as Joshua, said it was an attempt to draw police attention away from the university.

The nearly six-months of unrest has rocked previously stable Hong Kong, tipping the international financial hub into recession and frightening off tourists.

What began as a series of mostly peaceful demonstrations against a now-shelved bill to allow extradition to the Chinese mainland has morphed into wider calls for democracy and an inquiry into alleged police brutality.

Violence has worsened this month, with two men killed in separate incidents.

Demonstrators last week engineered a "Blossom Everywhere" campaign of blockades and vandalism, which forced the police to draft in prison officers as reinforcements, shut down sections of Hong Kong's transport network and closed schools and shopping malls.

Chinese President Xi Jinping last week issued his most strident comments on the crisis, saying it threatened the "one country, two systems" model under which Hong Kong has been ruled since the 1997 handover from Britain.

On Saturday, dozens of soldiers from the Chinese People's Liberation Army briefly left their Hong Kong barracks to help clean-up the streets.

It was a rare and symbolic operation, as the troops are normally confined to barracks and are meant to be only called out in a time of emergency.

Chinese defence ministry spokesman Wu Qian on Monday defended the operation, as he repeated warnings from Beijing that the military had the capabilities to quell the unrest.

"Ending violence and restoring order is the most pressing task we have in Hong Kong," Wu said in Bangkok.

In a small -- but largely symbolic -- victory for the demonstrators, Hong Kong's high court on Monday said a government ban on the wearing of facemasks at demonstrations was unconstitutional.

The ban has been widely flouted and police have found it all-but-impossible to enforce.