Five Weeks of Protests in Lebanon 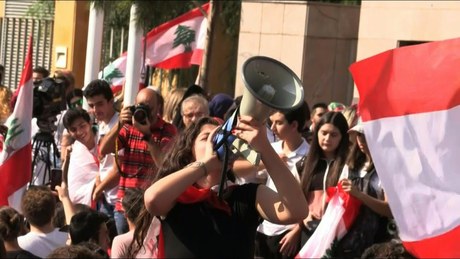 Lebanon has been paralysed by more than a month of protests demanding an overhaul of the entire political system.

Here is a recap:

On October 17, the government announces a tax on calls made via messaging apps such as WhatsApp, widely used in Lebanon.

Coming amid a looming economic crisis in a country whose infrastructure remains decrepit almost three decades since the end of its civil war, the announcement is seen by many as a step too far.

Thousands take to the streets in Beirut and other cities, some chanting "the people demand the fall of the regime" and security forces fire tear gas to try to disperse crowds.

The government scraps the messaging app tax later the same day, but the protests keep on going.

On October 18, thousands of demonstrators from a broad spectrum of sects and political affiliations bring the capital to a standstill.

They demand an overhaul of the political system, citing a broad range of grievances from austerity measures and state corruption to poor infrastructure and rampant electricity cuts.

The army reopens some highways blocked by protesters and disperses a huge crowd in Beirut with water cannon and tear gas. Dozens are arrested.

The demonstrations swell over the following days, with major gatherings also in second city Tripoli and other centres.

On October 21, Prime Minister Saad Hariri announces his government has approved a raft of economic reforms, including halving lawmakers' and ministers' salaries.

But protests continue and demonstrators dismiss the new measures as insufficient.

On October 25, the head of the powerful Shiite movement Hezbollah -- which with its allies holds a majority in parliament -- tells supporters not to take part in the protests.

The next day, Hezbollah mobilises counter-rallies, sparking scuffles with demonstrators.

On October 29, dozens of counter-demonstrators attack anti-government protesters in Beirut.

That evening, Hariri submits his resignation and that of his government, prompting cheers and dancing in the streets.

The following day, President Michel Aoun asks the government to stay on in a caretaker capacity until a new cabinet is formed.

Protesters regroup over the next days, demanding a government of technocrats, independent of traditional political parties divided along sectarian lines.

In a live television address on November 3, Aoun announces plans to tackle corruption, reform the economy and form a civil government.

On November 6, hundreds of schoolchildren lead demonstrations across the country. The following day, thousands of university and high school students also take to the streets.

On November 12, Aoun says that Lebanese unhappy with those in power should "emigrate".

His remarks spark a new eruption of demonstrations. The army opens fire to disperse protesters south of Beirut, shooting a man who later dies of his wounds.

Two days later, Safadi announces he will not assume the role.

Aoun on November 19 says he is open to a government that would include representatives of the popular movement.

On November 21, in a speech on the eve of the 76th anniversary of independence from France, Aoun reiterates his call for dialogue.

Nothing changed. Kelon Yaani Kelon. A government of independent technocrat is the only one acceptable. New parliamentary election will decide which politician deserves a second chance. No more old oligarch. We're done with the old system. Lebanon still has the potential to be the Singapore, Silicone Valley, banking and insurance hub, and the educational and innovative center of the Middle East. New Government first goal is 50% renewable energy and electric cars within 10 Years.

"غلطة التيار أنو راهن على شخص قراره مش حر وما بيحفظ الجميل، والأضرب من هيك غضينا النظر عن فساده"
Hikmat Dib (@DibHikmat) on twitter admitting the Free Patriotic Movement turned a blind eye on corruption. He says "worst of all we turned a blind eye on his corruption". Hikmat and his Aounist colleagues should be prosecuted to the full extend of the law.

Anyone notice how many from kizb said something about independence day? Crickets.

THe delay from the old man of Baabda is getting stale too. We need to get an independent doctor to certify that he can do his job. Things are happening--he isn't.