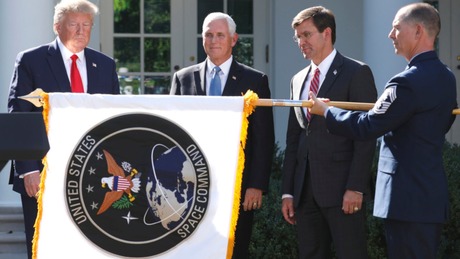 The United States is getting a new space force along with $738 billion in military spending under an agreement backed by lawmakers on Tuesday that fulfills a priority of President Donald Trump.

The fiscal year 2020 spending in the National Defense Authorization Act is a jump from the $716 billion authorized last year, and will go to pay for a wide range of military activities.

It will also create a space-based sixth branch of the military, a priority of Trump's, after the army, air force, navy, Marine Corps and coast guard.

The bill has won the approval of Democratic and Republican lawmakers in both the House and Senate armed services committees, making its passage in Congress likely.

The bill, which Congress must pass each year, allocates $635 billion to the Pentagon, and another $23.1 billion to the Department of Energy for the US nuclear arsenal's maintenance and fuel.

Operations in countries like Afghanistan, Syria, Iraq and Somalia get $71.5 billion, while the measure also pays for a 3.1 percent increase in the salaries of military personnel, their highest in a decade.

That amount was much less than the $9.2 billion requested by the White House, which wanted to devote a portion of the emergency funding to a wall on the Mexican border Trump has characterized as necessary to curb illegal migration from Mexico.

A controversial Trump campaign promise, the border wall has proven hugely divisive and will likely be fought over in future budget bills.

Elsewhere in the bill lawmakers have inserted provisions controlling the use of Pentagon funds including a ban on reducing the number of troops deployed in South Korea, delivering F-35 advanced stealth warplanes to Turkey and buying rail cars or buses from China.