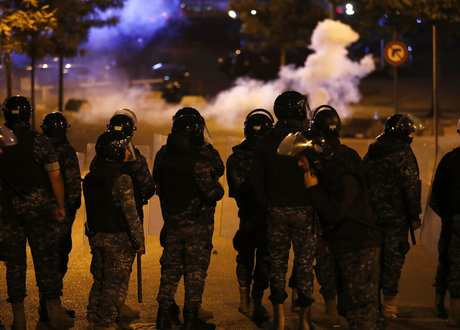 Tension rose in central Beirut when a group of young men tried to attack the epicenter of the anti-government protests, prompting security forces to fire tear gas.

Dozens of men threw stones and Molotov cocktails at anti-riot police who deployed to stop the advancing assailants.

Police pushed them back firing rounds of tear-gas. The group of mainly young men who came from the impoverished Khandaq al-Ghamiq area were chanting “Shia, Shia!” as they approached the area of anti-government protesters.

It is not the first time supporters of the two main Shiite groups in Lebanon, Hizbullah and AMAL Movement, attacked the protesters’ site.

Demonstrators should move to phase II... highest level of civility mixed with clear, consistent and focused demand. No more road blocks, disassociation from anyone attacking others, using force, bad language or anything damaging public or private properties. Keeping presence on weekend with massive demonstrations in public places mixed with cultural and educational events. Already an effort started to paint demonstrators as radicals, staging confrontation with army, making them responsible of economic woes... Remember how demonstration started in Syria and how the Assad regime released terrorists to take over demonstrators.

I wonder if any of those farm boys are being caught and thrown in jail like the other peaceful demonstrators.

Mastika must be proud of his wonderful people...

Time to divide Lebanon. Enough of these barbarians.

Should really save everyone some headaches and just put bars around their areas. That way, no one gets out and no one finds their way accidentally into their areas.

lol@Makhia
You are an entitled commentator probably living in the West. Come back to your country and work and pay taxes.

Shiits don't pay taxes... they collect money to free falasteen because they love Sunnis so much.

Many Lebanese abroad contribute billion of dollars yearly to the economy by opening businesses and sending money to support family members and relatives. Also, not to mention the large amount of money spent on every visit to our beloved Lebanon. Many of us give to the country and don’t expect anything in return.