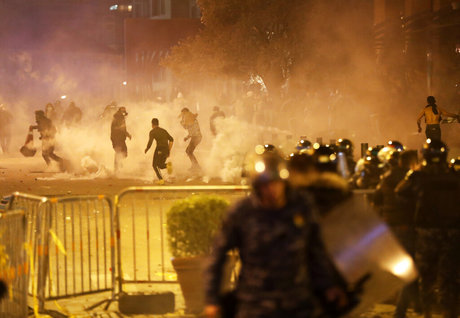 Riot police clashed with anti-government protesters in Beirut late Saturday, firing tear gas heavily to prevent them from breaching barricades near parliament, ahead of talks next week to appoint a new premier.

Lebanon has been swept by unprecedented nationwide protests since October 17, demanding the complete overhaul of a political class deemed inept and corrupt.

The government stepped down on October 29, but bitterly divided political parties have subsequently failed to agree on a new premier, although talks are now planned for Monday.

Saturday's clashes erupted at the entrance to the street leading to parliament, which was blocked by security forces.

Clashes followed in Martyrs Square -- the epicentee of protests since October -- and on a bridge in the city center.

Protesters were injured by batons while others passed out due to the intensity of tear gas fumes, and members of the security forces were also wounded.

Media reports said around 100 people were injurer in the clashes.

The Lebanese Red Cross told AFP people had been treated for breathing difficulties and fainting, along with injuries caused by stones, noting that security personnel and civilians were among those treated.

Lebanese civil defense also said it took 10 people to hospital, but did not specify whether the affected were civilians or members of the security forces.

The process of forming a government will take place as Lebanon faces an economic crisis.

The protesters have demanded a government made up solely of experts not affiliated to the country's traditional political parties, but analysts have warned this could be a tall order.

Earlier in the day, police in Beirut clashed with young people opposed to the anti-government protest movement.

The afternoon clashes erupted when young counter-protesters from Khandaq al-Ghamiq, an area of the capital dominated by Hizbullah and the AMAL Movement, tried to raid a key anti-government protest camp in Martyrs' Square.

The Lebanese protests have been largely peaceful but clashes have become more frequent in recent weeks, with supporters of Hizbullah and AMAL attacking protest camps in several cities amid counter-demonstrations.

Both AMAL and Hizbullah are partners in Lebanon's cross-sectarian government.

Hizbullah leader Sayyed Hassan Nasrallah on Friday warned that the formation of a new government could take time.

Nasrallah said he would support a coalition government with "the widest possible representation" that did not exclude any of the major parties, adding that it could even be headed by outgoing premier Saad Hariri.

The names of various potential candidates have been circulated in recent weeks, but the Sunni Muslim establishment on Sunday threw their support behind Hariri returning.

The international community has urged a swift appointment of a cabinet to implement key economic reforms and unlock international aid.

Nasrallah on Friday also urged his supporters -- and those of AMAL -- to stay calm, saying that the "anger" of some of his movement's members had gone "out of control."

To the shia heretic above:

Does the video below show your thugs being violent and attacking the security forcces and destroying public property?

lying---I guess you are all the same.

You are not angels, just look here on Naharnet, you are very secterian yourself yet you want to remove secterian system? Liar s.o.s, two faced coward, atleast I stand by my words unlike you.