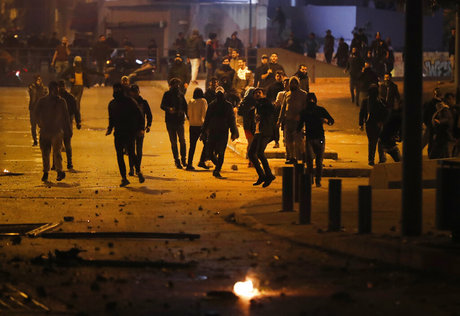 Security forces fired tear gas, rubber bullets and water cannons Sunday evening in a bid to disperse protesters outside Beirut’s Nejmeh Square, after firecrackers and bottles were hurled at them.

Several protesters disavowed the individuals who hurled the dozens of firecrackers, describing them as “infiltrators.”

Thousands of Lebanese protesters had defiantly returned earlier in the day to rally in the area, hours after security forces chased them out, using tear gas and rubber bullets and injuring dozens.

Saturday night into Sunday saw one of the most violent crackdowns on protesters since nationwide anti-government demonstrations began two months ago, leading to the resignation of Prime Minister Saad Hariri on Oct. 29.

The protesters who showed up in Beirut on Sunday chanted against the security crackdown and called for an independent new head of government unaffiliated with established political parties.

The crowd, many raising Lebanese flags, said: "We won't leave, We won't leave. Just arrest all the protesters!"

Others raised posters saying the tear gas won't keep them away. "We are crying already," said one, in a jab at the deep economic crisis Lebanese are facing. The streets leading to parliament were filled with men, women and even children. Some huddled in smaller groups while others were lifted on shoulders chanting in megaphones.

The Saturday night confrontations in Beirut left more than 130 people injured, according to the Red Cross and the Lebanese Civil Defense. The Red Cross said none of the injured were in serious condition and most of them were treated on the spot.

The violence on Saturday and Sunday comes just hours before the president was due to meet with representatives of parliamentary blocs to name a new prime minister. After weeks of bickering and despite calls from the protesters for a technocratic government, politicians seem set on bringing Hariri back to the post.

The demonstrators were clear they wouldn't accept his return. "Saad, Saad, Saad, don't dream of it anymore."

"I came back today to pressure the parliament to make the right choice tomorrow and choose a prime minister from outside the political parties. If they don't choose someone acceptable, we will be back to the streets again and again," said Chakib Abillamah, a protester and businessman who was demonstrating Saturday when violence broke out.

Caline Mouawad, a lawyer, said she watched as security forces violently broke up the protests and decided to join in solidarity. "What happened last night provoked me. I came down even if it means getting beaten tonight."

Caretaker Interior Minister Raya al-Hassan on Sunday ordered an investigation into Saturday’s clashes, which she said injured both protesters and security forces. She said she watched the confrontations "with concern, sadness and shock."

Al-Hassan blamed "infiltrators" for instigating violence and called on the demonstrators to be wary of those who want to exploit their protests for political reasons. She didn't elaborate.

The head of the Internal Security Forces, Maj. Gen. Imad Othman, turned up at the protest rally Sunday before the eruption of the new round of violence. He told reporters on the scene that the right to protest was guaranteed by the law. "But calm down, no need for violence," he said, appealing to protesters.

Security forces fired rubber bullets, tear gas and used water cannons throughout the night Saturday to disperse the anti-government protesters from the city center -- the epicenter of the protest movement in Beirut -- and around parliament. The protests had largely been peaceful since they began on Oct. 17.