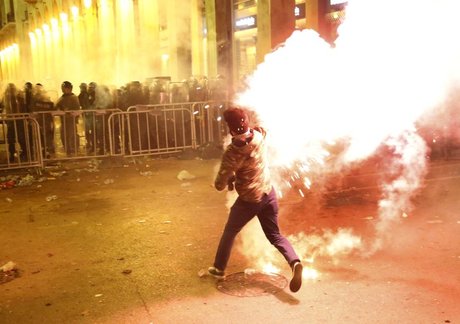 The Lebanese Army issued a statement on Monday on the clashes with police near the parliament a day earlier on the eve of much-delayed consultations to form a new cabinet needed to fix a deepening economic crisis.

“As a result of massive chaos witnessed in downtown Beirut last night accentuated by riots, encroachment on public and private property, and tossing firecrackers at the security forces, the army units deployed in the region and worked on supporting the Internal Security Forces to maintain stability and stop the attacks, and managed to restore the situation to normalcy,” said the Army statement.

Lebanese protesters clashed with police Sunday for the second consecutive night near parliament on the eve of delayed consultations to form a new cabinet.

The renewed clashes in Beirut came as Interior Minister Raya El-Hassan ordered security forces to open a "rapid and transparent" enquiry after dozens were wounded on Saturday night.

The unprecedented rallies have swept Lebanon since October 17, demanding the overhaul of a political system deemed inept and corrupt and the formation of an independent government of technocrats.

Clashes again erupted near parliament, with demonstrators throwing water bottles and firecrackers at the security forces who responded with tear gas and water canon.

Outgoing Interior Minister Raya el-Hassan demanded the identification of those responsible for the most violent episode since the anti-government protests began in October.

You weren't so tough on groups of destructive thugs on mopeds with green/yellow flags, were you. Didn't dare lift a finger, huh?

Watch the same Amal/Hezbollah thug(s) infiltrate the protestors in Downtown planning to cause chaos pretending to be part of the protesters and in another video he is part of the group of thugs chanting labayka ya nassrallah.

These thugs must have been paid by the Saudi/American/Zionist axis but they also chant "labayka ya nassrallah"..... strange indeed!