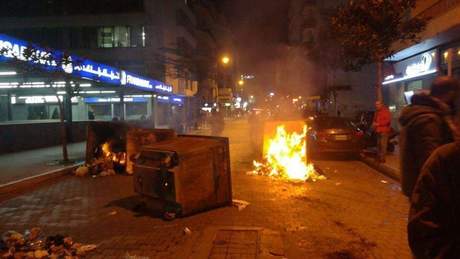 The National News Agency said the confrontation started after some protesters tried to bring down a security barrier protecting the bank’s premises.

LBCI TV said several protesters and policemen were injured in the standoff as many demonstrators were arrested by riot police.

Protesters meanwhile blocked the road with burning trash bins and other obstacles.

The TV network broadcast a video of angry young men, some masked, who were chanting pro-Nasrallah slogans and attacking the crew.

Earlier, a protesting young man told MTV that he came from Beirut's southern suburbs, a Hizbullah stronghold, to exclusively protest against the policies of Central Bank Governor Riad Salameh.

He added that he supports the anti-government protesters as long as they do not insult Nasrallah or Berri.

Later in the evening, security forces called on "peaceful protesters" to leave the area, signalling that they would use more force to contain the situation.

Media reports meanwhile said that some CCTV cameras and the facades of several banks were vandalized by rioters.

Anti-government protesters had brought the country to a standstill since the early morning hours, decrying authorities’ handling of the economic and political crises.

Protests have taken place inside commercial banks over the last few weeks as depositors tried to access their accounts.

But Tuesday night's violence was the first outside the central bank.

"We are worried about losing our savings ... Lebanon is not an easy country to save in," said Riva Daniel, 40 years old, who was among those protesting outside the central bank since earlier in the day. "We don't trust the banks here anymore."

The strong government has failed so badly