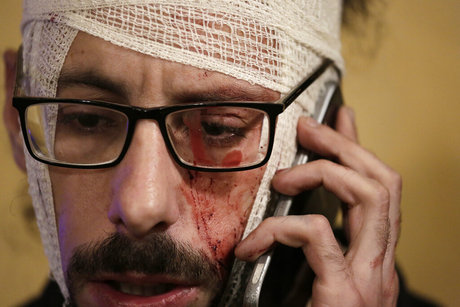 Human Rights Watch has described the Internal Security Forces’ response to the central Beirut demo which turned violent on Saturday as "brutal," calling for an urgent end to what it called a "culture of impunity" for police abuse.

"There was no justification for the brutal use of force unleashed by Lebanon's riot police against largely peaceful demonstrators in downtown Beirut," said Michael Page, deputy Middle East director at HRW.

"Riot police showed a blatant disregard for their human rights obligations, instead launching teargas canisters at protesters' heads, firing rubber bullets in their eyes and attacking people at hospitals and a mosque," he said.

Protesters have called for more rallies on Sunday.

Riot police fired volleys of tear gas and rubber bullets to disperse thousands of protesters rallied outside the parliament and in downtown. The protesters, who came from the country's north, east and Beirut, lobbed firecrackers at security forces, metal bars, stones and tree branches.

Caretaker Interior Minister Raya al-Hassan said Saturday that security forces were ordered to protect peaceful protests. "But for the protests to turn into a blatant attack on the security forces and public and private properties, this is condemned and totally unacceptable," she tweeted.

Imad Othman is losing it, unless he can't control his men. Either way, he needs to go! Let's not even mention Abbas Ibrahim!