‘No Turning Back’ Protests Rage in Lebanon 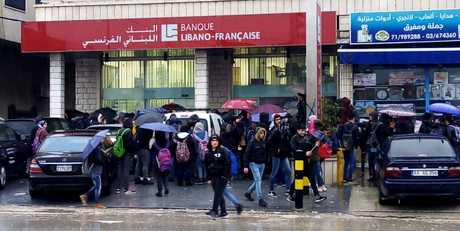 After the most violent weekend in three months of street protests, several roads were blocked on Monday and schools were closed in several areas around the country.

The National News Agency said protesters started early in the morning in the northern areas of Tripoli and al-Koura and blocked major roads and some side streets. The Lebanese army reopened some of them.

Moreover, schools in the Zahle town of Bar Elias staged sit-in near the banks to protest the monetary policies amid illegal capital controls and restrictions on dollar withdrawal.

The National News Agency said several schools were closed in the town of Chekka after students threatened a day earlier that they will prevent access for anyone wishing to go in.

School administrations had issued a statement earlier urging parents not to send their children to school. Students had called for a protest and march they dubbed “no turning back.”

Demonstrators at the weekend lobbed stones, firecrackers and street signs at riot police, who fired tear gas and rubber bullets to clear a flashpoint road near parliament.

Over the most violent weekend in three months of street protests, some 530 were wounded on both sides, according to a toll compiled by AFP from figures provided by the Red Cross and Civil Defence.

Lawyers and rights groups have condemned the "excessive" and "brutal" use of force by security forces.

Internal Security Forces, for their part, have urged demonstrators to abstain from assaulting riot police and damaging public or private property.

Lebanon has been without a government since outgoing prime minister Saad Hariri resigned on October 29 in the face of popular pressure.

Protesters have demanded a new government be comprised solely of independent experts, and exclude all established political parties.

The United Nations' envoy to Lebanon pinned the blame for the violence on politicians.

"Anger of the people is understandable, but it is different from vandalism of political manipulators, that must be stopped," Jan Kubis wrote on Twitter on Saturday.

Tripoli send a message to the cristhians in Beirute... Convert or Die...